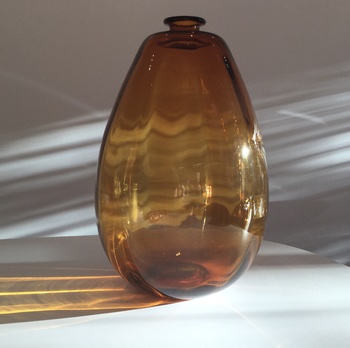 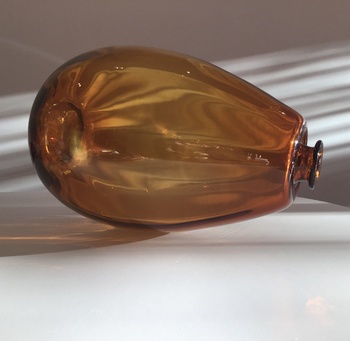 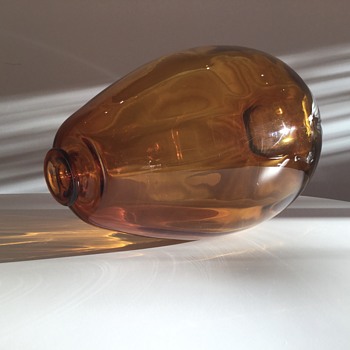 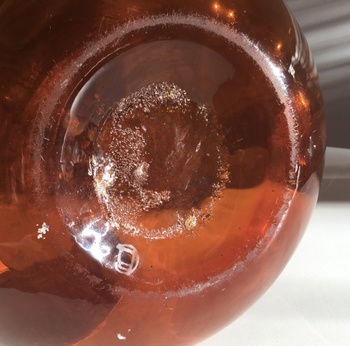 After twelve months it is about time to tell something of the tale of this vase that I was able to buy on ebay. The first time I had seen a Kalebas was well over twenty years ago when I went to the Netherlands for the first time. The monumental size of this piece of Leerdam glass had quite some impact.

The form is called 'Kalebas' or Gourd. I just loved the internal optics - the ribbing and the lip on the vase is just beautiful.

When I first saw this vase it was a 'sleeper'. I was holding out that no one else would see it when all of a sudden I got an email from a friend here in Oz who said that he just bought one. I thought to myself: "Damn .... foiled again!"

But he had bought his Kalebas from a source in New Zealand. There were actually two on offer round about the same time!

Finally the moments ticked down on ebay and it was mine for a song and those huge shipping charges from the US to Australia.

It has been sitting proudly at home dominating the room ever since.

Its official name is "Vaas KO 737" and it was produced at Leerdam from 1925 onwards. It was available in four colours: Annagroen, Paars, Donkerpaars & Amber.

His designs rival those of his glass contemporary Andries Dirk Copier.

Lebeau was an anarchist artist born in Amsterdam on May 26, 1878 and died in Dachau on April 30, 1945. He was a radical thinker. His designs reflect this radicalism. During the Nazi occupation he used his artistic talents to falsify identity cards and official documents for the Dutch resistance movement. He was arrested on 3rd November 1943 for aiding Dutch Jews. He was deported to the Dachau concentration camp on 24th February 1944. He died of malnutrition and typhus.