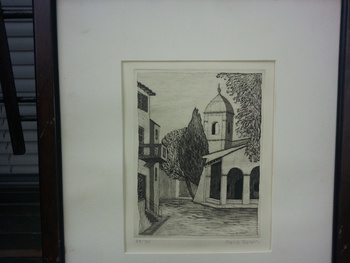 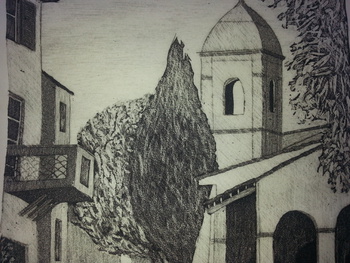 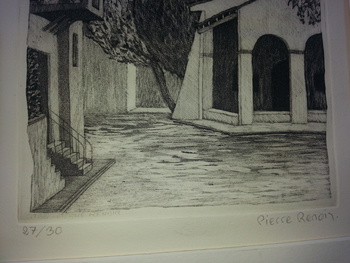 This image is that of an etching of Pierre Renoir, that I located in New York City's South Bronx.
This etching dates to approximately 1894 the second strike on creme laid paper in 1988.
It measures about 8 x 10 inches and imprinted with the name Pierre Renoir 1988; and notes 27/30 in the left lower corner and signed Pierre Renoir in pencil in the lower right handed corner.

An innovative artist, Pierre-Auguste Renoir was born on February 25, 1841, in Limoges, France. He started out as an apprentice to a porcelain painter and studied drawing in his free time. After years as a struggling painter, Renoir helped launch an artistic movement called Impressionism in 1870s. He eventually became one of the most highly regarded artists of his time. He died in Cagnes-sur-Mer, France, in 1919.

The son of a tailor and a seamstress, Pierre-Auguste Renoir came from humble beginnings. He was the couple's sixth child, but two of his older siblings died as infants. The family moved to Paris sometime between 1844 and 1846, living near the Louvre, a world-renowned art museum. He attended a local Catholic school.

As a teenager, Renoir became an apprentice to a porcelain painter. He learned to copy designs to decorate plates and other dishware. Before long, Renoir started doing other types of decorative painting to make a living. He also took free drawing classes at a city-sponsored art school, which was run by sculptor Louis-Denis Caillouette.

Using imitation as a learning tool, a nineteen-year-old Renoir started studying and copying some of the great works hanging at the Louvre. He then entered the Ecole des Beaux-Arts, a famous art school, in 1862. Renoir also became a student of Charles Gleyre. At Gleyre's studio, Renoir soon befriended three other young artists: Frédéric Bazille, Claude Monet, and Alfred Sisley. And through Monet, he met such emerging talents as Camille Pissarro and Paul Cézanne.
Beginning of Career

In 1864, Renoir won acceptance into the annual Paris Salon exhibit. There he showed the painting, "La Esmeralda," which was inspired by a character from Victor Hugo's Notre-Dame de Paris. The following year, Renoir again showed at the prestigious Salon, this time displaying a portrait of William Sisley, the wealthy father of artist Alfred Sisley.

While his Salon works helped raise his profile in the art world, Renoir had to struggle to make a living. He sought out commissions for portraits and often depended on the kindness of his friends, mentors, and patrons. The artist Jules Le Coeur and his family served as strong supporters of Renoir's for many years. Renoir also remained close to Monet, Bazille, and Sisley, sometimes staying at their homes or sharing their studios. According to many biographies, he seemed to have no fixed address during his early career.

Around 1867, Renoir met Lise Tréhot, a seamstress who became his model. She served as the model for such works as "Diana" (1867) and "Lise" (1867). The two also reportedly became romantically involved. According to some reports, she gave birth to his first child, a daughter named Jeanne, in 1870. Renoir never publicly acknowledged his daughter during his lifetime.

Renoir had to take a break from his work in 1870 when he was drafted into the army to serve in France's war against Germany. He was assigned to a cavalry unit, but he soon fell ill with dysentery. Renoir never saw any action during the war, unlike his friend Bazille who was killed that November.
Leader of Impressionism

After the war ended in 1871, Renoir eventually made his way back to Paris. He and some of his friends, including Pissarro, Monet, Cézanne and Edgar Degas, decided to show their works on their own in Paris in 1874, which became known as the first Impressionist exhibition. The group's name is derived from a critical review of their show, in which the works were called "impressions" rather than finished paintings done using traditional methods. Renoir, like other Impressionists, embraced a brighter palette for his paintings, which gave them a warmer and sunnier feel. He also used different types of brushstrokes to capture his artistic vision on the canvas.

While the first Impressionist exhibition was not a success, Renoir soon found other supportive patrons to propel his career. The wealthy publisher Georges Charpentier and his wife Marguérite took a great interest in the artist and invited him to numerous social gatherings at their Paris home. Through the Charpentiers, Renoir met such famous writers as Gustave Flaubert and ?mile Zola. He also received portrait commissions from the couple's friends. His 1878 painting, "Madame Charpentier and her Children," was featured in the official Salon of the following year and brought him much critical admiration.
International Success

Funded with the money from his commissions, Renoir made several inspirational journeys in the early 1880s. He visited Algeria and Italy and spent time in the south of France. While in Naples, Italy, Renoir worked on a portrait of famed composer Richard Wagner. He also painted three of his masterworks, "Dance in the Country," "Dance in the City" and "Dance at Bougival" around this time.

As his fame grew, Renoir began to settle down. He finally married his longtime girlfriend Aline Charigot in 1890. The couple already had a son, Pierre, who was born in 1885. Aline served as a model for many of his works, including "Mother Nursing Her Child" (1886). His growing family, with the additions of sons Jean in 1894 and Claude in 1901, also provided inspiration for a number of paintings.

As he aged, Renoir continued to use his trademark feathery brushstrokes to depict primarily rural and domestic scenes. His work, however, proved to be more and more physically challenging for the artist. Renoir first battled with rheumatism in the mid-1890s and the disease plagued him for the rest of his life.
Final Years

In 1907, Renoir bought some land in Cagnes-sur-Mer where he built a stately home for his family. He continued to work, painting whenever he could. The rheumatism had disfigured his hands, leaving his fingers permanently curled. Renoir also had a stroke in 1912, which left him in a wheelchair. Around this time, he tried his hand at sculpture. He worked with assistants to create works based on some of his paintings.

The world-renowned Renoir continued to paint until his death. He lived long enough to see one of his works bought by the Louvre in 1919, a tremendous honor for any artist. Renoir died that December at his home in Cagnes-sur-Mer, France. He was buried next to his wife, Aline (who died in 1915), in her hometown of Essoyes, France.

Besides leaving behind over two hundred works of art, Renoir served as an inspiration to so many other artists—Pierre Bonnard, Henri Matisse and Pablo Picasso are just a few who benefitted from Renoir's artistic style and methods. 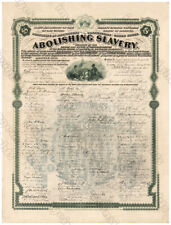 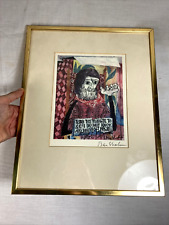