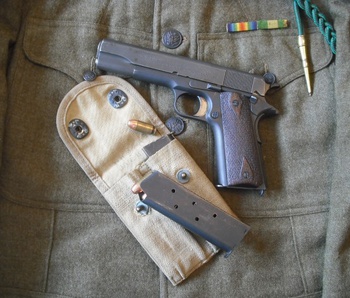 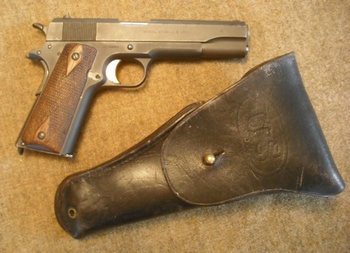 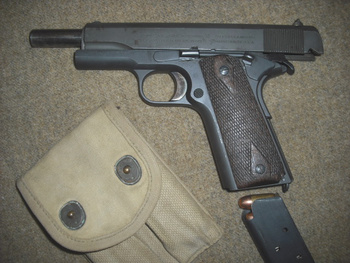 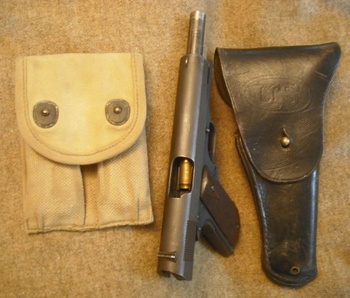 Talk about iconic, The Model 1911 was standard issue in the US armed forces from 1911 till 1924, when some slight modifications were made and it became the Model 1911A1. As the A1, it continued as the standard issue until 1985. That’s over 70 years of service, covering WWI, WWII, Korea and Vietnam. It continues to be the pistol of choice for some Special Operations personnel.

As a young enlisted man, I was so interested in the 1911, that I used to volunteer to clean my commander’s M1911A1, just to practice taking it apart and putting it together.

Although other companies would eventually produce the 1911 series, mine was manufactured by Colt. The serial number on my 1911 indicates it was made in 1917. It has all the original features of the pre-A1 Model 1911: thinner front sight, original hammer spur configuration, longer trigger with no relief cut behind it, and flat spring housing behind diamond cut wooden grips. The left side is marked “UNITED STATES PROPERTY” and the right side is marked “MODEL OF 1911. U.S. ARMY”.

Although Parkerizing started at the end of WWI, I believe mine may have been Parkerized as part of refurbishment in WWII. The finish only shows wear to the high points on the slide, frame and muzzle.

The ammo pouch I’m displaying with my pistol is marked “P.B.&CO. JAN 1918.” The magazines are later issue. The ammo shown are actually dummy rounds I use for display, although the cases have 1941-1945 military headstamps. I’ll post the uniform I’m using as background at a later date.

The holster shown was actually scavenged from a dumpster on Ft Ord, California. The post was closing and the 7th Infantry was casing its colors, so a lot of stuff was just thrown out. There was enough waste to anger any American taxpayer, but it was also a golden opportunity to rescue a lot of stuff that was headed for the dump.

Ammo: The M1911 fires the .45 ACP round. Original U.S. military ball ammo was a 230 grain full metal jacketed round nose bullet with a velocity of 855 feet per second. I use the same bullet backed by 4.8 grains of Hercules Bullseye, averaging 779 fps. It shoots high, but by adjusting my aim point I can stay inside the 8 ring at 25 yards. 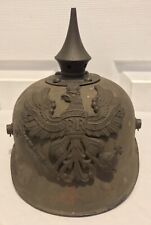 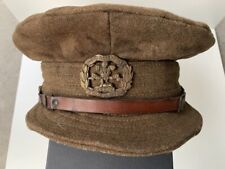