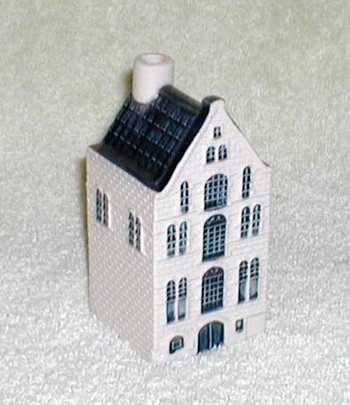 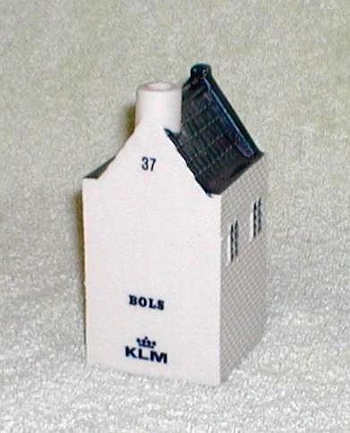 - KLM Airlines "Bols Genever" Blue Delft ceramic house bottle
- Made in Holland by Royal Koninklijke Goedewaagen
- Bols Genever is a spirit made by Royal Distilleries, Holland
- House #37 / 4" tall and empty / (chimney would have red wax seal lid)
** KLM started issuing these miniature house bottles in 1952, presented to travelers aboard KLM flights in Business and Royal Class. There is Dutch Genever, 35% alcohol, in the houses, which are in fact bottles with a cork and seal on top. Sometimes the genever has been drunk but mostly the empty bottles were empty all along. On flights to some countries with alcohol restrictions empty houses are presented. Sometimes there is a cork and seal and sometimes there isn't (and never was) on the empty bottles. In the 1993-94 period on the 75th anniversary of KLM, a total of 75 different houses were issued. Now, every year in October, a new house is added to the collection.
- There are currently a total of 94 different house bottles.