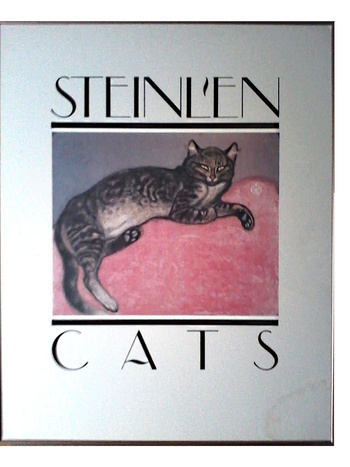 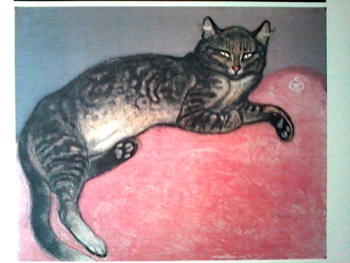 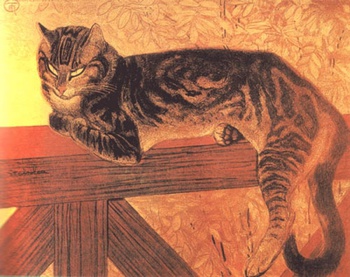 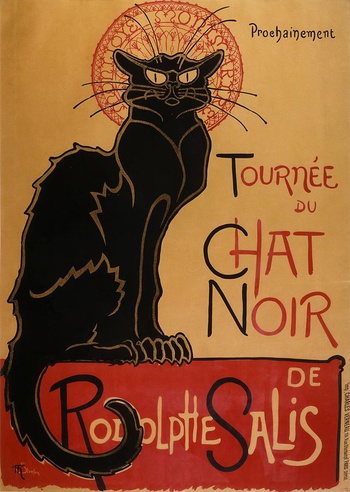 Picked this framed poster up from Salvation Army today. I love this huge 24" x 30" art poster showing one of Theophile Alexandre Steinlen prints called "Winter" Cat on a Cushion. There is a companion piece called "Summer" Cat on a Balustrade (see pic 3). I saw an original of that print appraised on "Antiques Roadshow" for 10 to 12 thousand dollars ! Both were done towards the end of the Art Nouveau period around 1909. The short lived Art Nouveau movement only lasted from 1880 to 1914. Steinlen was a prolific commercial illustrator often using his daughter Collette with his cats. The poster for the "La Chat Noir" Restaurant (see pic 4) is also one of his more famous prints done in 1896. The art poster I bought is framed in a nice mauve metallic aluminum frame with glass. It does have a rather large water stain in the lower right corner. I might try putting a matte on it, which should hide most of it. Not sure how old this poster might be, possibly 80's or 90's. -Mike-

Theophile Alexandre Steinlen was very fond of cats, and often used his own cats as models and accommodated them in his posters. Steinlen's cats became a very popular feature of his work.
Steinlen's studies of his cats are firmly associated with his works. One of his most liked posters is 'Chat Noir' (Black Cat)
Born on the shores of Lake Geneva in Lausanne, Switzerland, Steinlen (1859 - 1923) studied philosophy at the university there and went on to accept a position as a trainee textile designer in Mulhouse, a town and commune in eastern France.
Whilst in his early twenties, and newly married, the young artist was persuaded by the painter Francois-Louis David Bocion, his tutor at the university, to move to the Montmartre district of Paris.
There he became acquainted with the avant garde artistic and literary social milieu of the Chat Noir (Black Cat)cabaret.
Steinlen became friends with and worked with the writer Emile Zola, the composer Paul Delmet, Jean Richepin and other poets, Toulouse-Lautrec the artist, and significantly the French cabaret singer, songwriter, comedian and nightclub owner Aristide Bruant.
Through his contacts Theophile Alexandre Steinlen established himself as a prominent illustrator of popular journals of the period such as Le Rire and Gil Blas, and contributed original lithographs to music publishers who used them as cover art for their popular sheet music.
Steinlen is perhaps best known for his wonderful commercial posters depicting Parisian life.
Often compared with the posters of his friend and fellow illustrator Toulouse-Lautrec, Steinlen's works are personal, simplistic and intimate.