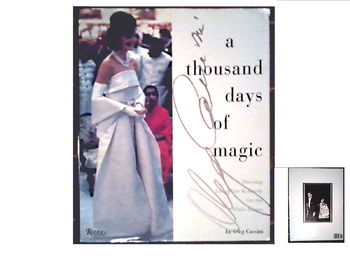 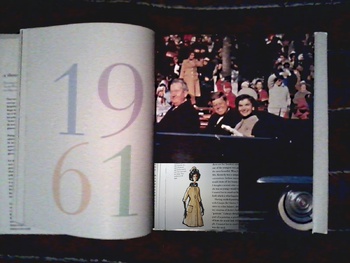 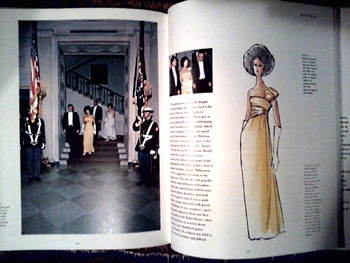 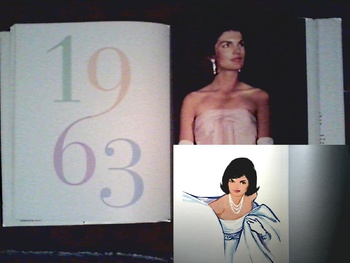 I didn't find much yesterday but this was sitting all by itself on one of the empty shelves in the book section at GW. "A Thousand Days of Magic" Dressing Jackie Kennedy for The White House by Oleg Cassini (Reissue Edition). I picked it up and started thumbing through it. Even though I was only eight or nine years old at the time it all seemed so familiar. This was probably my first exposure as to what beauty, grace and elegance was all about. Yes, there was something "magical" about that time. It's not only written as a fashion book, but it's loaded with history and insight from Mr. Cassini's point of view. A nice coffee table book, 9" by 11" and 304 pages. Full of great historical photos and Mr. Cassini's beautiful design drawings. -Mike-

"A Thousand Days of Magic" (Reissue Edition)
September 15, 1995
Dressing Jackie Kennedy for The White House
By Oleg Cassini
Publisher Rizzoli
Courtesy Amazon.com
A gorgeously revised edition of this fashion favorite book, which combines Cassini’s memoirs of working closely with Jacqueline Kennedy during her brief White House years, his fashion philosophies and ideas, and the iconography of the early 1960s style and energy of the Kennedy years. Jacqueline Kennedy’s selection of Oleg Cassini to design her personal wardrobe as First Lady was not only fashion history, but political history as well. As the creator of the "Jackie look," Cassini made the First Lady one of the best-dressed women in the world and a glamorous icon of the Kennedy era. During the 1000 days of the Kennedy administration, Cassini designed over 300 outfits for Jackie Kennedy—coats, dresses, evening gowns, suits, and day wear—and coordinated every aspect of her wardrobe, from shoes and hats to gloves and handbags. In this book, Cassini offers a fascinating and comprehensive view of his role as Jackie’s personal couturier, a position that allowed him unprecedented access to both Jackie and John Kennedy as a designer and a trusted friend. From the details of his first meetings with the First Lady to his thoughts on Jackie’s clothes and their legacy, Cassini’s recollections are far-ranging and informative. Also included are Cassini's original sketches accompanied by 200 color and black-and-white photographs of the First Lady as she tours India, France, England, and Italy, shows off the White House, and hosts state dinners and family gatherings. Public moments as well as private ones capture the great elegance and charm of one of the most admired and emulated women in the world.