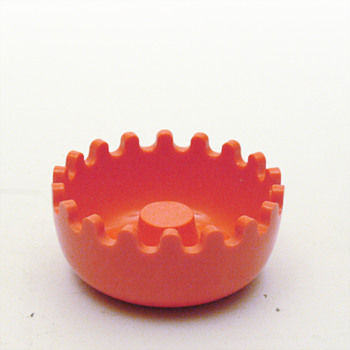 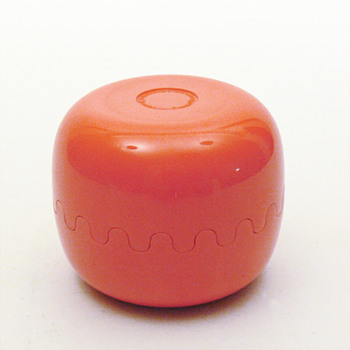 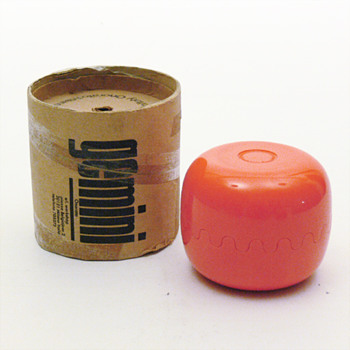 This is one of the ashtrays I treasure not only because of its excellent design but for sentimental reasons. I’ve told sometime before that my father was a doctor and every year, for Christmas, he received lots of presents from both patients and medical labs. And one year he received one like this, only in red and white. That ashtray I loved when a child. I am not sure what happened to it. But most probably someone threw it away, just what happened to half those 60s and 70s wonderful plastic gadgets he used to get. I recall the last time I saw it it was at my elder brother’s bedroom, all burnt and stinking of the awful tobacco he used to smoke at the time (I have to say he’s pretty stingy so he bought the cheapest cigarettes, and they absolutely stank. Nowadays he only smokes whenever anyone lends him a cigarette… I sometimes wonder how is it possible we share the same parents). In any case, when I saw this ashtray for sale I simply HAD to have it. I was lucky it even came in its original box (which I remembered prefectly). Such a pity it didn’t come in the same colours, but orange is sooo nice anyway.

The GEMINI is a perfect mix between a CLAM (1969, Alan Fletcher) and a COPENHAGHEN (1966, André Ricard), two of the most successful ashtray designs in the late 60s.: it is built the same way of the Clam, with two similar halfs that fit one into the other through its dentures, and has the elevated platform at the center to extinguish the cigarette. Its diameter is 9 cm and it stands 7 cm tall. It’s made of pretty thick melamine, which was undoubedtly THE material at the time (it was sold as the unbreakable plastic… no way, it breaks just the same LOL –I could show the pictures of some melamine items pretty badly broken-).

Amber made me remember with her comment i had forgotten to talk more deeply about the box. The next text appears both here and at the comments section:

" The extra short cardboard tube box I am sure was something pretty cheap, and the hole on the lids was intended to see the colour of the ashtray you were picking up, and as they could come in two colours, both sides had holes. I guess that's also part of the "gemini" project about the ashtray."