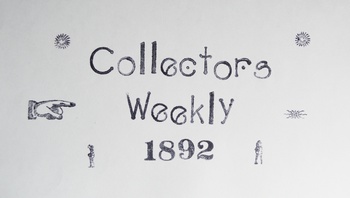 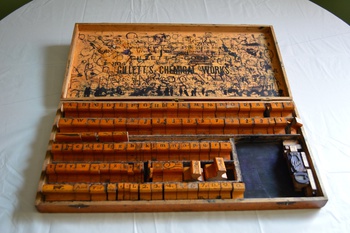 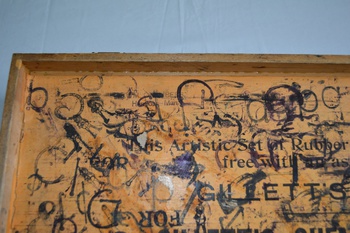 I purchased this a while ago, in an online auction.
I knew it was old just wasn't sure how old.
After getting it home, I found a name stamped in the upper left hand corner of the lid.
The name WM Chambers, Hamiota, Man.
I was born & took most of my schooling in Hamiota & live fifteen miles from there.
William Chambers was one of the first business men in Hamiota.
The first train rolled into the new town in January of 1892, it contained many loads of lumber for new buildings.
Work began immediately on the new store, he finished it with the help of his clerk after the carpenters quit due to the cold weather.
When completed he slept on a cot in the aisle & his clerk made a bed on the counter. This was preferable to the conditions in the only boarding house in town where as many slept as the floor would accommodate.
On the inside lid it states "This Artistic Set In Rubber Type given absolutely free with an assortment of Gillet's Goods
Gillett's Chemical Works, Chicago IL, Toronto, Ont. & London, England
After speaking to our local archivist I found out that William Chambers's business partner traveled to the Chicago World Fair in 1893.
He retired in 1932, but the business operated under different names & purposes over the years.
The building is still being used selling household items & furniture, much as it did 122 years ago.