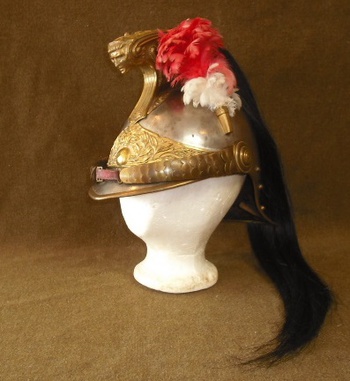 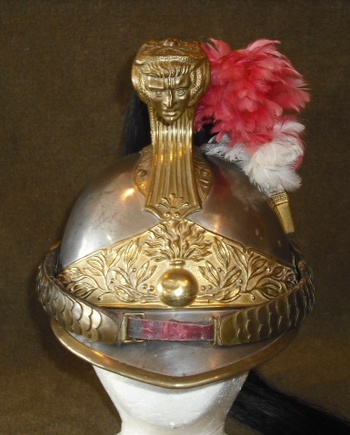 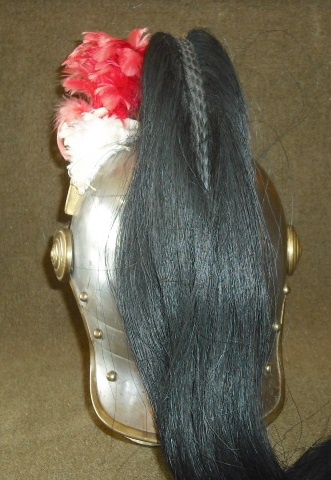 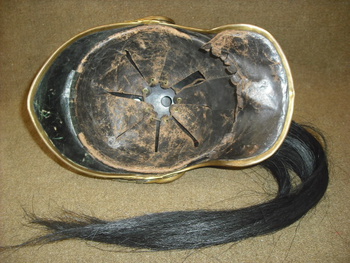 On the Eve of WWI, France had not fought another European Power since 1870. To my mind, nothing says unready for the storm that was about to begin like this pattern 1870 heavy cavalryman’s helmet. Little changed from Waterloo, this type of helmet was actually worn by cavalrymen deploying to face the Germans in August 1914 (although with a protective cloth cover). By mid 1915 it was gone from the battlefield, replaced by the ubiquitous Adrian Helmet. The helmet remains for ceremonial purposes in some French units.

Although very similar to the cuirassier helmet, I believe this was worn by French dragoons, the difference being that this one does not have the marmouset (little brass ball with plume at the front) that I believe identifies the cuirassiers.

The helmet has a steel bowl, with brass chin scales and trim. A medusa adorns the comb, which sports an over 2 foot long horsehair tail. Why someone would want the back of their head to resemble a horse’s behind is beyond me, but it is pretty cool. The hair is braided down the center, as you can see in photo three. The back of the helmet is marked “A. Godillot” for the manufacturer Alexis Godillot (1816-1893). It’s also stamped with a “59” at the back of the comb, which I believe is the number of this helmet within a unit. The interior has a leather shell, which includes an interior leather covering of the brim and tail, which I believe also dates it to pre-1912.