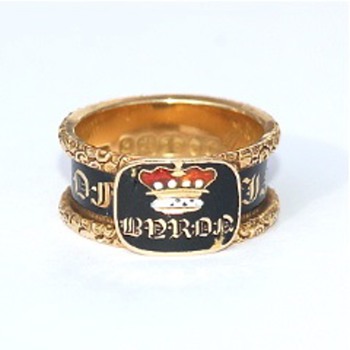 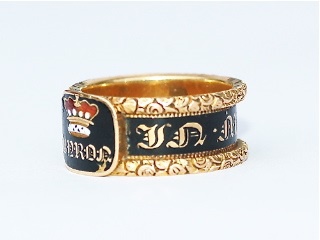 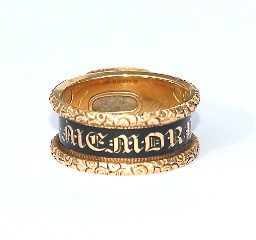 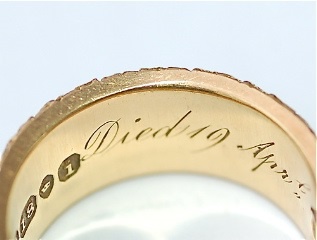 An exceptionally rare 18 carat gold mourning ring, with a shield bearing a red and white enameled crown icon, "BYRON" scripted beneath; "IN InnoDB OF" scripted around the outside of the band, with black enamel in the negative space; "Died 19 April 1824 Aged 36" engraved in cursive script on the inside of the band. Six English hallmarks stamped on the inside of the band: maker's mark: "CR" (i.e., Charles Rawlings); duty mark: George III; purity marks: a crown, "18" (i.e., 18 carat English gold); assay office mark: a jaguar's head (i.e., London); date hallmark: "i" (i.e., 1824). Piece of Byron's hair in compartment behind plaque.

Memorial ring for the Romantic poet Lord Byron, [1788 -1824], 18 carat gold ring with chased borders, enameled on the outer hoop: In Memory Of and with an enamel plaque of coronet in colors surmounting the name Byron. To interior, a full set of hallmarks for 1824, maker's mark for Charles Rawlings and the details of Byron's death : Died 19th April 1824 at 36, and with a locket compartment containing a fragment of hair. The ring is size M [US 6] and the band is 1/3 of an inch wide. Memorial rings for Byron are exceptionally rare. Only one other example is known, in the Pforzheimer collection, New York Public Library. No other examples are recorded in jewelry historians' literature, sales archives or in the comprehensive inventories of jewelry held by major museums.

An examination of documents contemporary to the ring shows its likely source. Following Byron's death on April 19th 1824 in Messolonghi, Greece, his physician Dr. Bruno made arrangements for the repatriation of his body to England. Byron's intimate friend, John Cam Cobhouse, 1st Baron Broughton, received a lock of Bryon's hair which was then passed onto a Miss Leigh, [see Sotheby's sale 17th December, 2008, lot 35, a lock of Byron's hair with document]. This Miss Leigh must pertain to Augusta Leigh, Byron's half-sister and confidante. A reference in a letter from Augusta Leigh to Reverend Hodgson, assistant master at Eton and a lifelong friend of Byron's, indicates what must have happened to some of the gift of the hair.

Tell me how I can send you a mourning ring, which I have thought a little of the hair would make more acceptable.... Ever yours most truly A.L.
[Memoirs of the Rev. Francis Hodgson Scholar Poet and Divine with numerous letters from Lord Byron and others by his son Rev James T. Hodgson, 1878 p.149]

There is a footnote in the publication for the letter.
This mourning ring with the name and date of the death and a lock of hair, is now in my possession - J.T.H. [James Hodgson, son of Francis Hodgson].

The ring corresponds with a ring sold at Christies London on January 17th, 1899, lot 26, sold by a Mrs Hodgson and bought by a J. Ward for £14. The lot description : a gold memorial ring of Lord Byron with chased borders, enamelled black band and coronet in colours containing a lock of his hair and inscription inside. Presented by the Honourable Mrs Leigh, Lord Byron's sister to the Rev J. Hodgson who was a great friend of the poet.

Whilst the Pforzheimer ring is of the same design it does not contain a fragment of hair, as this example does. [Note the suggestion by Augusta Leigh that she was adding hair to the ring]. Contemporary references would seem to suggest that the known examples of the ring were associated with Byron's family and close friends, and that this ring is highly likely to have been given to Rev. Hodgson by Augusta Leigh after Byron's death and later sold at Christies by Hodgson's daughter-in-law.

The 'cult' of Byron is said to have begun with the publication of his epic Childe Harold's Pilgrimage in 1812. Fashionable London was enamoured with the controversial young poet and ladies reputedly swooned in his presence. His scandalous affair with Lady Caroline Lamb, and his even more scandalous divorce from Annabella Milbanke added to his notoriety and allure. When Bryon died at Messolonghi, Greece in April 1824, the public reaction in England was one of shock and disbelief. Tennyson, on hearing the news of Byron's death said, 'A day when the whole world seemed to be in darkness for me'. Byron was repatriated to England and crowds queued to view his body as he lay in state for two days. The Dean of Westminster Abbey refused to allow Byron's burial in Poets' Corner on the grounds of his questionable morality, and he was finally interred in the Byron family vault in the Church of St Mary Magdalene, Hucknall Torkard, Nottinghamshire in July 1824. In 1969, 145 years after Byron's death, a memorial stone honoring him was placed in Westminster Abbey.