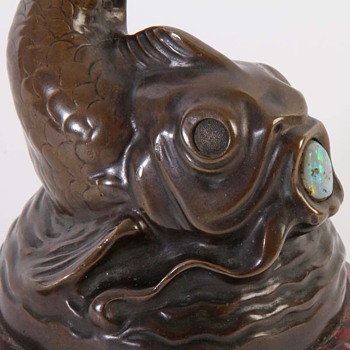 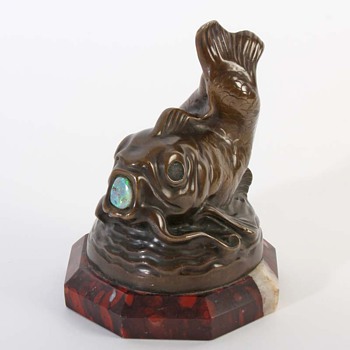 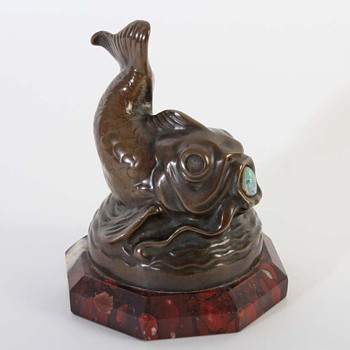 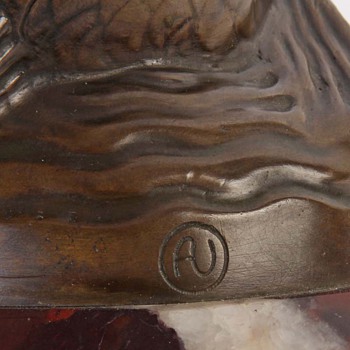 Sometimes you purchase on knowledge, sometimes by eye, and sometimes on faith alone. This antique fits into the latter two categories. I have no clue who sculpted it, but have some hints based upon the materials used, likely purpose and the design theme.

First and foremost, the theme almost certainly is Asian and is a reference to an Eastern symbolic design motif used to represent an attainment of ambitions and aspirations towards wealth and prosperity. According to Chinese lore, it is said that koi (carp) attempt to swim against the powerful current of the Yellow River, so that they can swim through the Dragon Gates and be transformed into a Dragon. Because the fish made such a treacherous journey to reach its goal, it is seen as a symbol of determination and strength. Also, it is common in Asian cultures for there to be dual meaning in linguistic homophones. In Chinese, "Carp" is similar sounding to the word "business". It is also homophonic with "profit" or "advantage." "Fish" is homophonic to "surplus" or "wealth". Pearls in Asian cultures generally indicate refinement or wisdom. So, I think we can reasonably conclude that the sculptor's intention was to craft something symbolizing intellectual or literary achievement resulting in the acquisition of wealth and wisdom.

Second, the materials used, particularly the red ruby marbled stone base was a popular material used in bronzes and other decorative/utilitarian items made or retailed in Germany/Bohemia and Italy. The style of the rendering, while using Asian symbolist motifs, is also Jugendstil. The use of a wonderful cabochon opal, instead of a pearl, also suggests that it may have had a Continental origin and/or was used as a substitute to keep production costs lower.

Third, the purpose of the object likely rests in its size and meaning. The size and weight suggest a luxury paperweight, which is reinforced by the meaning of the design - intellectual/literary achievement with hope for wealth and wisdom.

Lastly, the piece has a nice stylized artist mark, which could either be "AU" or "AV." I have had little luck with this latter crucial clue. There was an Italian artist working during the Jugendstil/Stile Liberty period named, Antonio Ugo, but I don't have any comparable signatures or marks from this artist.

Any attribution assistance or help with this piece would be most appreciated.