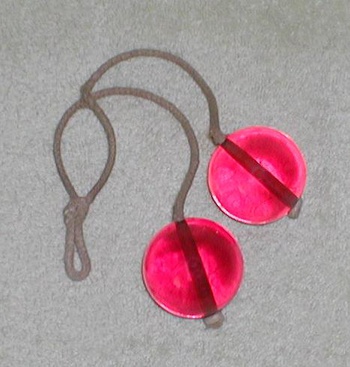 This is a pair of "Clackers" from the early 1970's. - Clackers (also known as Ker-Bangers and numerous other names) was a toy popular in the late 1960's and early 1970's consisting of two plastic spheres suspended on string which, when swung up and down, banged against each other, making a clacking sound. Clackers are similar in appearance to bolas, the Argentinian weapons. They are formed out of two hard plastic balls, each about two inches (5 cm) in diameter, attached to a tab with a sturdy string. The player holds the tab, with the balls hanging below. Through a gentle up-and-down hand motion, the two balls swing apart and back together, making the clacking noise that give the toy its name. With practice, it is possible to make the balls swing so that they knock together above the hand as well as below. Clackers were banned in 1985 when reports came out of children becoming injured while playing with them. Fairly heavy and fast-moving, and made of hard acrylic plastic, the balls would occasionally shatter upon striking each other.