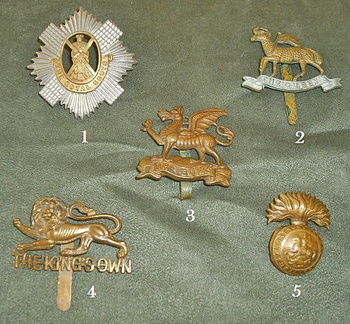 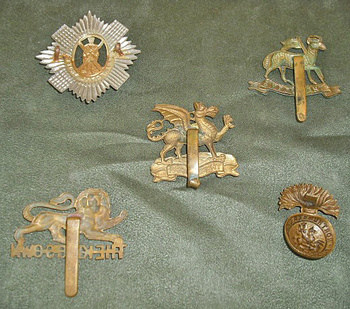 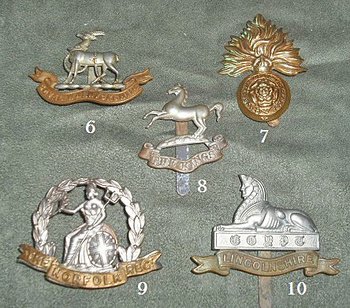 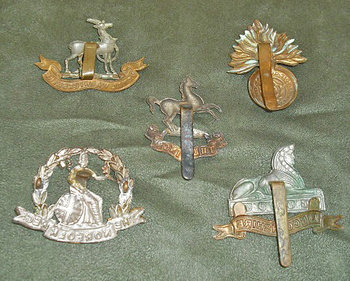 One hundred years ago today, Britain entered WWI by declaring war following Germany’s invasion of Belgium. To prepare for the anniversary, I’ve been working on my collection of cap badges for each of the line infantry regiments at the outbreak of the war. I just got the last one in June, so I barely made it! By “line infantry” I do not include territorials, guards regiments and Royal Marines. I had to draw the line somewhere!

1. The Royal Scots (Lothian Regt.) is the oldest of these regiments, going back to 1633. They wear St Andrew, the patron Saint of Scotland. A red felt background behind him would indicate first battalion, and green the second.

2. The Queens (Royal West Surrey Regt.) wears the Lamb of Christ, part of the arms of Queen Catherine. I got this one off my first crumbling trophy belt that I couldn’t save.

3. The Buffs (East Kent Regt.) got its name from the buff facing color on their uniforms. This badge was from a second WWI trophy belt that I was only able to save part of. The “slider” attachment device was bent to keep the badge on the belt.

4. The Kings Own (Royal Lancaster Regt.) wear the Lion of England, which may have been granted by William III. The title was bestowed by George I.

5. The Northumberland Fusiliers wear the traditional fusilier’s flaming grenade. The center depicts St. George and the Dragon. The slider on back went missing at some time in its history.

6. The Royal Warwickshire Regt. depicts an antelope, possibly from a Spanish standard taken in the Battle of Saragossa. This one was from that second trophy belt and also has its slider bent to secure it.

7. The Royal Fusiliers (City of London Regt.) Their grenade bears the rose and garter device found on the cannons they originally guarded. No fewer than 12 Victoria Crosses were awarded to this regiment in WWI, including the very first VC of the war, awarded posthumously to Lieutenant Maurice Dease for actions at Mons on 23 August 1914.

8. The King’s (Liverpool Regt.) depicts the white Horse of Hanover, granted after the Jacobite Rebellion in 1715.

9. The Norfolk Regiment bears the figure of Britannia, awarded by Queen Anne after the battle of Almanza in 1799. My piece had its slider removed and replaced by lugs, I think to be worn on a different type of cap.

10. The Lincolnshire Regt. bears the sphinx for its defeat of the French in Egypt in 1802. I got this off my first disintegrated trophy belt.