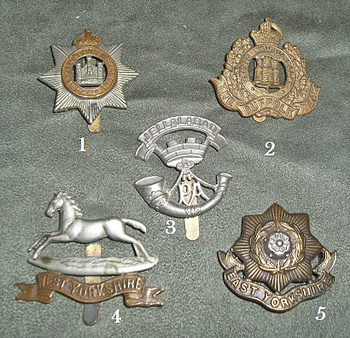 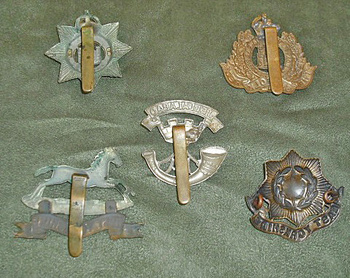 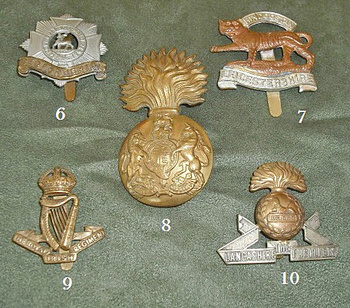 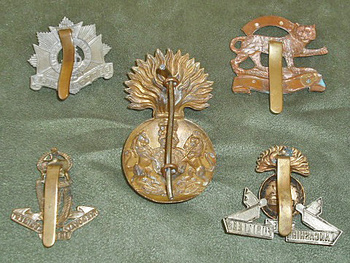 Often there isn’t any difference in a regiment’s badge from 1914 and one from 1944. Sometimes tiny differences in manufacture help identify the era. Other times I bought them with a WWI vet’s keepsakes, or attached to a “trophy belt”, a popular souvenir of WWI (I keep those intact when I can). It’s not absolute proof of era, but I document whatever provenance they have. I’ll keep upgrading, but for now unless there is an outright fake in my collection, all these badges should at least date to the first half of the 20th century.

1. The Devonshire Regiment bears the Exeter Castle over the inscription Semper Fidelis in commemoration of the defense of the city during the English Civil War. This is yet another badge from my first unsalvageable trophy belt.

2. The Suffolk Regiment bears the castle and key of Gibraltar for its defense in 1779-83. Usually this badge is in white metal with a gilding metal scroll. This is an all brass version issued as an economy measure in 1916. Part of the crown is broken off.

3. Prince Albert’s (Somerset Light Infantry) bears a mural (walled) crown and “JELLALABAD” for its defense of the city during the First Afghan War.

4. The Prince of Wale’s Own (West Yorkshire Regiment) is another badge featuring the white horse of Hanover.

5. The East Yorkshire Regiment wear the Rose of Yorkshire as the central element of its badge. This was the last badge I needed to complete the collection. My example has the less common lugs rather than a slider.

6. The Bedfordshire Regiment features a deer crossing a ford from the insignia of the Hertford Militia which joined the regiment in 1881.

7. The Leicestershire Regiment bears the royal tiger and battle honor “HINDOOSTAN” for services in India during 1804-23.

8. The Royal Scots Fusiliers bears the royal arms on a huge fusiliers’ grenade, the badge designed to be worn on a glengarry rather than the peaked cap, and has lugs north and south.

9. The Royal Irish Regiment bears the harp of Ireland. It received its “royal” title after storming the castle at Namur in 1695. It was disbanded in 1922 with the formation of the Irish Free State.

10. The Lancashire Fusiliers bears the sphinx in its fusilier’s grenade for its actions against the French in Egypt in 1801. In WWI its members received 17 Victoria Crosses, the highest number awarded within any regiment.