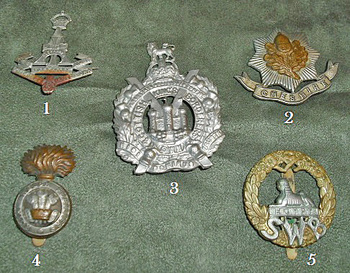 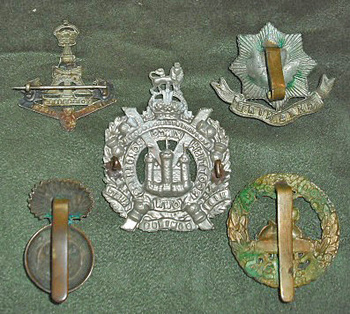 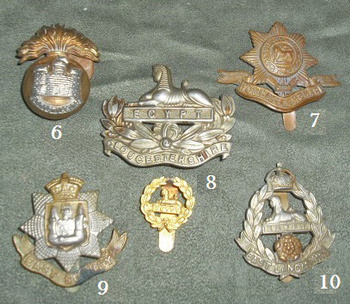 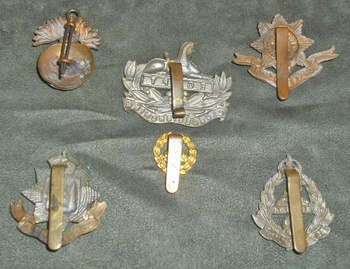 If I’d known how many reproduction badges are being passed off as original these days, I might not have started this collection. I’ve tried to weed out any fakes, but there are a few I’m not 100% sure of that I keep as placeholders until I find one I like better. If you raise an eyebrow at any of these badges, let me know. Even better, let me know why.

1. Alexandria, Princess of Wale’s Own (Yorkshire Regiment) bears her “A” interwoven with a Danish Cross. My example had the slider cut off and replaced by a brooch pin, indicating it was modified for wear on a sweetheart’s blouse or a veteran’s lapel. This modification is not uncommon.

2. The Cheshire Regiment bears an acorn and oak leaf was supposedly granted by George II for actions in the Battle of Dettingen in 1743. My example has the slider bent to hold it to the trophy belt I got it from.

3. The King’s Own Scottish Borderers was raised in Edinburgh and has the city’s Castle in the center.

4. The Royal Welsh regiment bears the flaming grenade with the Prince of Wale’s plume and cornet. In 1922 the spelling “Welsh” became “Welch”, identifying this as in era.

5. The South Wales Borderers bears the sphinx for actions in Egypt in 1801 and the wreath of immortelles was awarded by Queen Victoria for actions in the Zulu war when this regiment was known as the 24th Foot.

6. The Royal Inniskilling Fusiliers has the castle of Inniskilling on their flaming grenade. Before 1934 the pattern had the flag on the castle flying the left, so this is a post WWI badge I need to upgrade, but otherwise is identical to WWI.

7. The Worchestershire Regiment bears the royal lion inside the star of the Order of the Garter.

8. The Glostershire Regiment is the only regiment to have a small badge worn on the back of their caps, commemorating when they ought back to back at the battle of Alexandria. Bought separately, the front badge is from that second trophy belt.

9. The East Surrey Regiment bears the arms of Guildford, Surrey’s county seat. This example bears the imperial crown rather than the standard “King’s Crown”. It also came from that first trophy belt.

10. The East Lancashire Regiment also bears the sphinx from battling the French in Egypt in 1801.