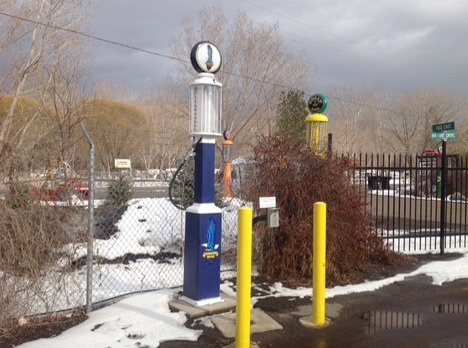 This old gas pump was another one of those pumps that we resurrected out of the pile of pumps we gathered over 45 yrs ago when we were restoring early model T Fords in the 70s/80s. This pumps was restored with the Richfiled logos and proudly stands at the exit keypad of aaaLakeside Storage in Provo Ut. You can Come and see the FREE Petrolania Museum or just search us on the web and go to our Blogs to see some of the pix we have posted or just go through our pix on our website to see more.
The Richfield Oil Company began business in Los Angeles sometime in 1905 but didn't actually open a gas Service Station till about 1917. It only lasted till the early thirties when the Depression took it under. It was revived later in the 30s by Cities oil and Consolidated as its stocks were bought up & even Sinclair got in the action to keep Standard Oil of Calif. from taking it over. Eventually Richfield combined with Atlantic to become the Atlantic Richfield company and later renamed ARCO. It's really all about fishing! The big fish eat the little fish!