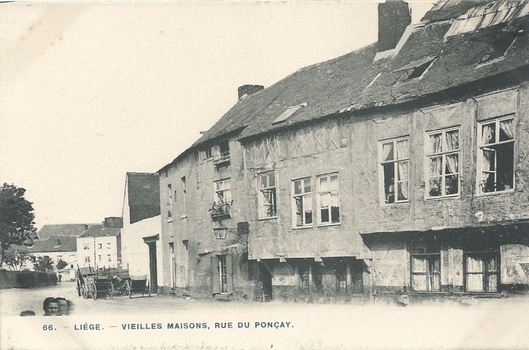 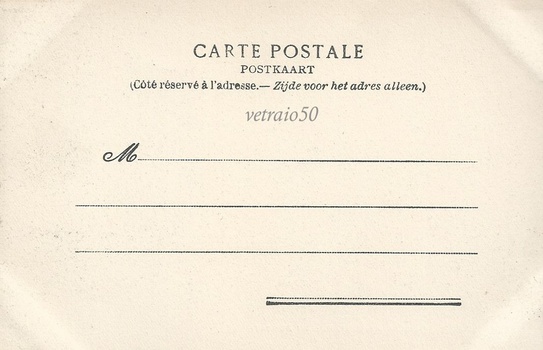 Septimus and Clara Miller visited Belgium in 1907 just seven years before the beginning of World War I. They collected quite a few cards on Bruxelles and Waterloo - but only one card on the city of Liège. The city is situated in the valley of the Meuse River, in the east of Belgium, not far from this country's borders with the Netherlands and with Germany.

I still do not know why they chose this card. Perhaps it was a memory of an architectural style that they saw on their travels? Perhaps it was the ghostly figure of the lady in the window and/or the strangely printed heads of the three young boys at bottom left?

Google maps took me to the street and I was able to look for the houses on the rue du Ponçay that is not that far away from the river Meuse, Quai Bonaparte and rue Général de Gaulle.

Certainly these houses have disappeared completely.

Then this week the card took on another meaning for me when I was watching the ceremonies commemorating the beginning of WWI on August 2, 2014 held in the city of Liège.

In the Wall Street Journal of August 4 Frances Robinson wrote about the city of Liège with a headline:
World War I Centenary Marked in Liège
World Leaders Gather in Belgian City Where Fighting Started.

"LIÈGE, Belgium—Representatives of 83 countries gathered on Monday to mark the centenary of World War I in this Belgian city where fighting started a century ago, using the occasion to reflect on the conflicts raging near Europe's borders and to call for an end to violence in Ukraine and Gaza. ....

With the border between France and Germany heavily fortified following the Franco-Prussian war in 1870-71, the German army decided to enter France through Belgium, whose neutrality was guaranteed by the U.K. and others under the 1839 Treaty of London.

On Aug. 2, 1914, Germany gave an ultimatum to Belgium to allow its troops to pass peacefully through the country to reach France. King Albert I declined, so the German Empire invaded on Aug. 4, prompting the declaration of war by the U.K. The first Belgian casualty was cavalryman Albert Fonck, killed 12 miles from Liège that morning.

The city—which was fortified, but needed reinforcement—was unable to resist heavy shelling and held out for two days. This gave other countries time to mobilize, and the British press at the time spoke of "brave little Belgium." It was a harbinger of the carnage to come: On Aug. 22, 1914, there were 70,000 casualties, as fighting spread beyond Liège to the Ardennes and the country's south-east in the Battle of the Frontiers.

Liège was the first ever non-French city to be awarded France's Légion d'Honneur, its highest honour."

I understood a little bit more about Liège and what happened to the houses on this street.