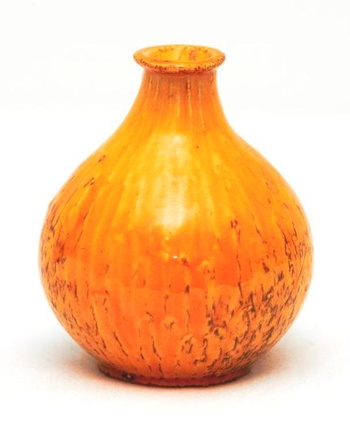 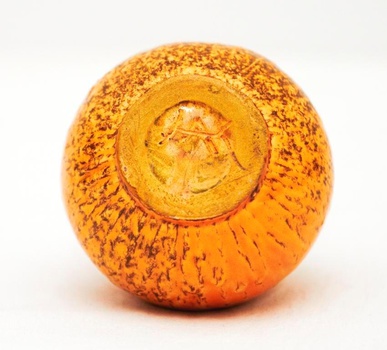 This little pear-shaped vase was made by Svend Hammershoi (1873-1948), undoubtedly the most important of all the artists associated with the Kähler Pottery in Naestved, Denmark, at one point or other. Not only did he work there for a longer period than anybody else, he also developed a large amount of objects which are very characteristic in style (and quite sought after today).

He was trained as a painter and often painted old buildings in Copenhagen or other places such as Oxford – often with leafless trees and fog, thus creating a special, almost eery, atmosphere. From an early age he also worked with ceramics and was employed at Royal Copenhagen (1891-84) and Bing & Grondahl (1898-1900), until he started working for Kähler in 1904-1907 and again 1911-1948. He also produced some absolutely breathtaking works in silver for which he was awarded with a gold medal at the World’s Fair in Paris in 1925.

The uranium glazes (a shiny yellow one and a matte orange one) were very popular at Kähler, but at some point it was discovered that uranium was dangerous and the last (known) purchase of it at the Kähler Pottery was made in 1939, so this type of glaze was not used much after ca. 1940.