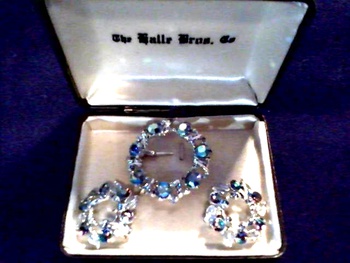 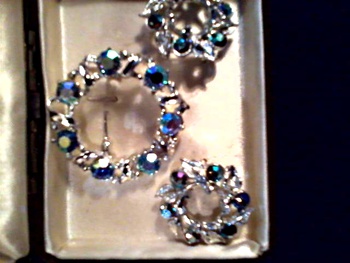 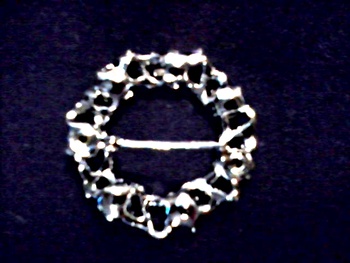 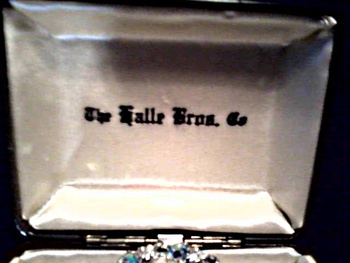 Found this 3 piece brooch set at GW this morning. At first I thought the smaller two were ear rings but they are pins as well. They are made with beautiful "Aurora Borealis" crystals. I'm fairly sure these are Weiss ( if not apologies) they are not marked. They're in a Halle Bros. Co. box which I believe featured their pieces in their costume jewelry department. A lot of Weiss is not marked for this very reason as they were sold in high end department stores of the time. According to EzineArticles.com "Weiss produced many types of sets of jewelry. Pin and earring sets, necklace and bracelet sets, three-piece sets of pins, earrings and bracelets, matching necklace and earrings, any sets, if complete, increase the value beyond that of the individual pieces. If you're lucky enough to find the original box, then you've got a real treasure". Halle's was right here in Cleveland so these being in their original box is a great find. -Mike-

The Weiss Company was founded in New York City in 1942 by a former Coro employee, Albert Weiss. The company flourished during the 1950's and 1960's, offering high quality costume jewelry with Austrian rhinestones of exceptional quality and clarity. Its beautiful rhinestones studded figural jewelry, such as Weiss butterflies, insects, fruits and flowers from the 1950’s, are avidly sought by collectors. They also produced a reproduction of German smoky quartz crystals that they called "Black Diamond Jewelry". Weiss jewelry, which is just as becoming, and truly appreciated, is comparable to Eisenberg and Bogoff jewelry. Some Weiss jewelry was outsourced to "The Hollywood Jewelry Company" and marketed under the Weiss name and trademark. Without a doubt, the company manufactured some of the most beautiful and appealing rhinestone jewelry of the post WWII era.

The Halle Brothers Co. (1891–1982) was considered the leading department store company in Cleveland, Ohio. Founded on 7 February 1891 by brothers Samuel Horatio Halle and Salmon Portland Chase Halle, the very first store was located at 221 Superior Avenue near the city's Public Square where the brothers had bought out a hat and furrier shop owned by T.S. Paddock. Two years later, they moved to Euclid Avenue and East 4th Street and added ready-to-wear clothing to the merchandise mix. The firm was officially incorporated in 1902 as the Halle Bros. Co. After growing and moving several times, the company eventually built its main store at 1228 Euclid Avenue by 1910. By 1927, their new $5 million Huron-Prospect Building was opened, creating an emporium in what is now known as the city's Theater District.Suffering from an overbuilt flagship, the abandonment of Downtown Cleveland and over expansion into the outlying areas, the company was sold to Marshall Field's in 1970, under which it deteriorated, falling behind local rivals Higbee's and May Company. Attempts to lure less upscale patrons with mid-priced goods failed. Associated Investors subsequently liquidated the company in 1982 with all the stores either sold or closed despite attempts to operate them as a smaller suburban six-unit operation. A location at Randall Park Mall in North Randall, Ohio was planned for the 1970s, but was cancelled. That space sat empty until a multiscreen cineplex was built there in the late 1990s.