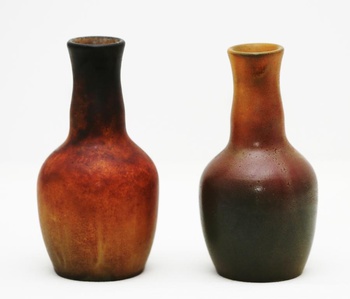 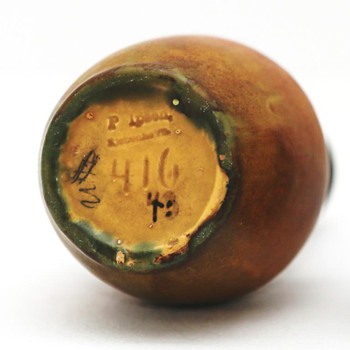 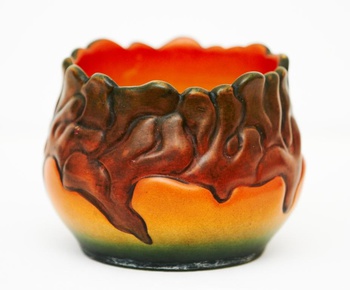 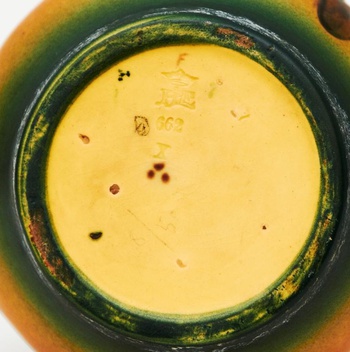 Two small vases (‘flacon’ in the 1903 catalogue) and a slightly later bowl or flower pot manufactured at the P. Ipsen Factory. Founded in 1845, Ipsen was very popular in the late 19th century, producing copies of Greek vases etc. But around 1900 this was no longer considered fashionable and the factory was in dire need of revitalization. So Bertel Ipsen (1846-1917, son of the founder Peter Ipsen) engaged a number of artists such as Georg Jensen (later more famous for his jewelry), J.F. Willumsen (later more famous as a painter) and the most influential of them all, the very versatile artist and industrial designer Thorvald Bindesboell, whom most people know without being aware of it as he was the designer of the Carlsberg beer label (in 1904)! They all contributed with fresh new designs while Bertel Ipsen invented the so-called ‘dekorativglasur’ (‘decorative glaze’), which was yellow to brown to begin with (early attempts seen on the two small vases) and later more orange to brown/green (as seen on the bowl). This glaze became very popular and the factory produced huge amounts of pottery with this glaze (ubiquitous on flea markets today, as it is again considered very unfashionable…).

There is no artist’s name associated with the two small vases, but the bowl was designed by Axel Jensen, whose work is often mixed up with that of Bindesboell. He was very prolific, but unfortunately, little is known about him. In the Ipsen catalogues 130 items are assigned to him (vases, lamps etc.).

I have posted a later art deco vase from Ipsen here: http://www.collectorsweekly.com/stories/110391-p-ipsens-enke-vase-1933