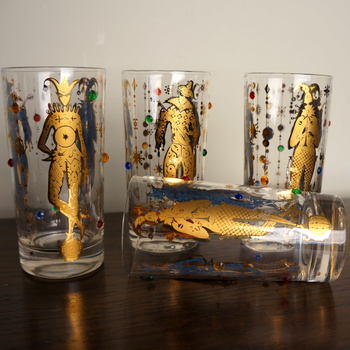 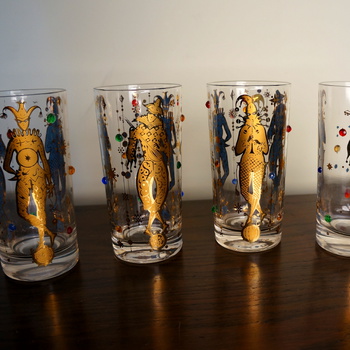 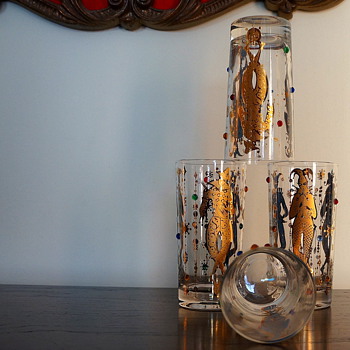 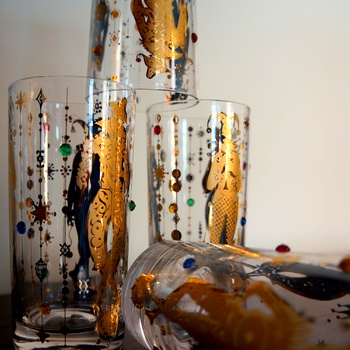 Mardi Gras Pattern History: The Culver Glass Company's first run of Mardi Gras pattern glassware was circa 1959 - 1962. The design consisted of flat gold leaf & glass jewels. It appears that there were very few of these made, yet they were sold in huge serving sets with 24 to 48 glasses. Variations of this pattern include the figures backed in Blue, Gold or Black.

1962 - ? Saw the second edition, made of thick, textured / raised, shiny 22K gold and glass jewels. (these are my favourite)

1969 - 1983?: This last edition was the most ornate, made with enamel colorful balls instead of the glass jewels. It appears the dates of production of these various versions or the Mardi Gras pattern, overlapped, yet the last version remained in production, into the early 80s in small sets of 4 production.

There are a few variation in this pattern where you may see Blue, Gold, Black or even Green backing on the Gold figures. I have yet to discern how this correlates with dating, but it is a problem for me when collecting pieces to sell as sets and should be something to look out for if you are collecting and wish your pieces to match.

The history of Culver Glassware: Oddly shrouded in mystery, Culver was founded in Brooklyn, NY in the late 30s by Irving Rothenberg. In the 1980s Culver ended its own glass production and started printing from glass blanks, mostly made in China, but also provided by American companies such as Libbey. Upon ending their glass making production the company moved to New Jersey and remained there until they closed in the early 90s.

The secret process of heat firing 22k Gold to glass, died along with the last known member of the family that had been involved with the business, on that fateful date now known as 9/11.

For the most part, Culver did not begin producing gold embellished glass until the late 50's and much of their pieces made prior to this time, are unsigned, unlabeled and often difficult to identify.

Wealth was abundant in the US in the late 1950s through the 1960s, and the time of the "two martini" lunch was well at hand. The over romanticized glitz of Hollywood and glamour of Vegas, created a new era of fine dining, both out and about and at home.

Culver, as well as a few other glass pattern designers such as Georges Briard (who by the way, is not a person but a company name) created regal ornate "Baroque" barware patterns, emulating "Old World" Gothic and Medieval Architecture and business soared.

With the release of the Valencia pattern, popularity exploded & soon Culver was considered THE wedding gift of the "Up and coming", becoming available in the finest department stores. The process of high heat firing 22k Gold onto the glass for permanence, was kept close to the vest by the family & employees.

Into the 1970s, when sunken living rooms and shag carpet were king, demand for opulent cocktail service led to demand for equally opulent barware sets. Martinis in the home and at work were a common thing... even expected, and a less documented phenomena in Mid Century and early 70s design of "Gothic Revival" and "Old World" lavish styling was equally embraced with the sleek, Mid Century Modern / Futurist Atomic Age styles, more commonly associated with the time.

Identifying Culver Glassware and Patterns: The facts about identifying Culver glass by mark, in order to indicate date of manufacture are highly & widely inaccurate on the internet. Pieces were signed in scrolling script from the 30s to late 70s, but not all of them and often only one key piece if sold in a huge set (which most of the most collected sets today, were originally sold in large sets).

In the 80s block lettering became common, but I have seen 1980s pieces with the old scrolling signature as well. I have also sen the scrolling signature with INC at the end. A more accurate indicator is the addition of INC to the mark (be it block or script) lettering, which is found only on 80s to 90s pieces. Paper labels came into play in the mid to late 80s too, so its pretty much a crap shoot where signature is concerned, if you ask me.

Signed or Unsigned Culver Glassware: Although some collectors prefer their glassware signed. It does not appear that the Culver signature on a piece, in any way raises its value or collectability. In fact, most Mard Gras pattern Culver Glassware pieces and other of the rarest and most collectible are unsigned, since they were most often sold in huge collections including Martini Pitcher and Ice Bucket, with only these two key pieces signed. (damned hard to find these, grab it if you see one)

Dating Culver Glassware: As a side note, I consider the date that a pattern came into play, more important than when the item was actually created. Patterns such as Cranberry Scroll or Emerald Scroll were initially designed in the 1960s and therefor I consider them as Mid Century glass from the 1960s, regardless of if they were printed in the 1960s or 1980s.

The only time an obvious difference may come into play between the same pattern made in the 60s or the 80s is if a pattern originally printed onto glass made by Culver Glass rolled into the late 80s when Culver started using pre made blanks. Many of the Libbey Glass made blanks are not of the same quality and it is immediately noticeable at first sight. The Libbey Glass pieces are all stamped at the bottom of the glass with the highly recognizable Libbey L. Regardless of this fact, the Libbey pieces are very rare, few and far between, making them quite coveted by the collecting purist.