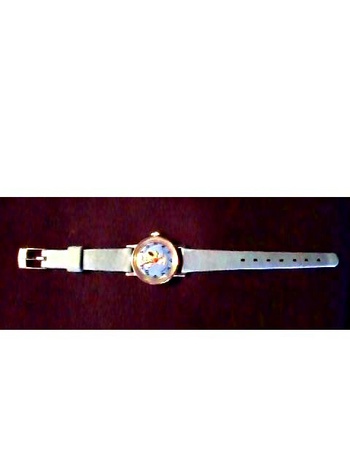 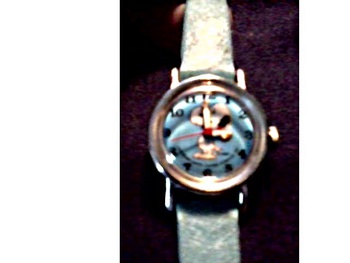 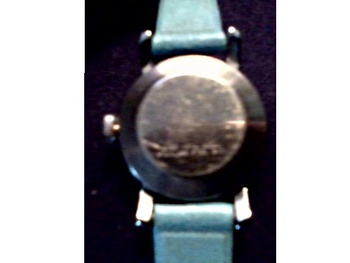 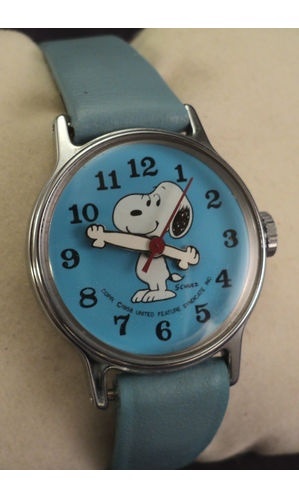 I spent about an hour helping the ladies sort through a shoe box full of jewelry this morning at Salvation Army. As compensation I was given a box to put whatever I wanted into it for a bulk price. This was one item. A nice vintage Timex Snoopy child's watch. The band is very tiny sky blue and made of vinyl. The case is marked "base metal" on the back. The face doesn't say Timex on it instead it's on the bands buckle. There is copyright info and I think a date on the face but it very hard to read. Looks like "United Pictures Syndicate Inc. and a name by Snoopy's feet maybe "Schultz". It runs great and shows very little wear. I paid under five bucks for this, a bunch of costume jewelry and a couple silver pieces! -Mike-

Charles M. Shulz created and began drawing "Peanuts" in 1950, and the comic strip went on become the most famous and enduring in history. The adventures of Charlie Brown, his dog Snoopy, and their friends is one of the most popular comic strips of all time, appearing in more than 2,000 newspapers and being translated into more than two dozen languages. The characters from this enduring series are well known to us all and have spawned a multitude of collectible merchandise. One of the most popular characters watch collectibles around is Snoopy. This beloved beagle is displayed on timepieces from many different manufacturers, but the most popular and most sought after by watch enthusiasts is the Timex Snoopy watch collection.
The single most contentious feature of these timepieces would have to be the date of manufacture. We've all seen ads for Timex Snoopy watches that claim the watches were made in 1958. This is due to the copyright printed on the dial, which states "Copr 1958 United Features Syndicate, Inc.". This refers to the Peanuts copyright granted to United Features in 1958, NOT to the date of manufacture. (The original copyright was granted in 1950, and was periodically updated. Some Timex Peanuts watches have different years as the copyright, such as the Flying Ace Snoopy.) Not only is it highly improbable that Timex manufactured all of these watches in a single year, in 1958 Timex was not even known by that name. The company name at that time was Ingersoll. This mistake is so common that we've even spotted a Snoopy "tennis racket" watch incorrectly documented in a recent issue of a popular and respected price guide for watches, as well as in other watch collector guidebooks.
The first Timex Snoopy watch was manufactured in 1969, and features a happy dancing Snoopy with his arms rotating to point to the time. This was such a hit that Timex created the same watch in many different color combinations, from basic black and white to red, yellow, and white combinations.