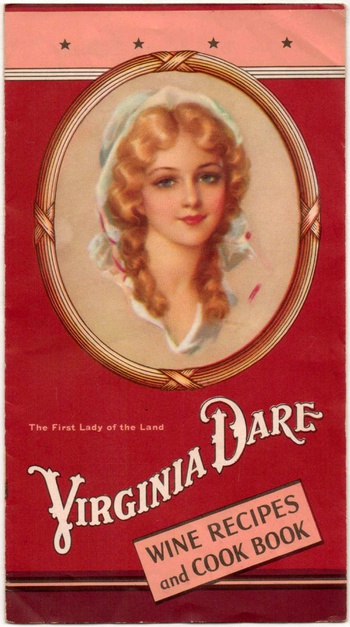 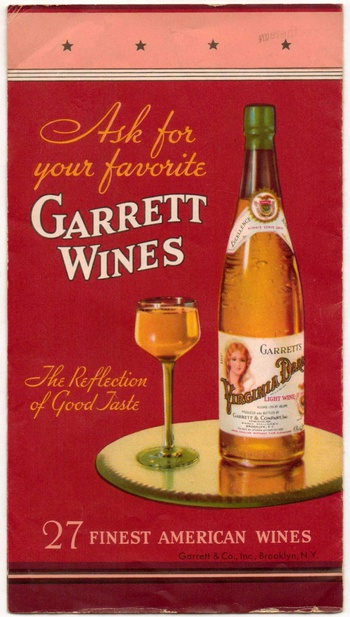 This is a circa late 1930's - early 1940's "Virginia Dare" Wine Recipes and Cookbook from Garrett Wines, Brooklyn, NY. -- 8 page fold-out booklet
** Garrett Wines was founded in 1835 in North Carolina. Around 1920 it moved to Brooklyn and the minute it arrived, New York State went dry and prohibition forced Virginia Dare to reconsider its business model. They managed to survive and even prosper during the prohibition years by continuing to make wine, but they took out the alcohol and did their best to retain the wine's flavor. The extracted alcohol was used to make pure fruit and vegetable flavors ranging from vanilla to onion. In this way the plant continued to turn out over 15 million quart bottles of Virginia Dare non-alcoholic "wine" a year, as well as 20,000,000 bottles of flavoring extract. In an added effort to survive the prohibition era, they began selling concentrated grapes with instructions for making wine at home, which was legal. After the repeal of prohibition in 1933, the company again began making wines and by 1941 they were producing champagnes as well as its regular wines. By 1945 the company held 10,000 acres of vineyards in New York, No. Carolina, and California. In 1965 the company's wine business was purchased by Constellation Brands, however, the flavoring extract side of the business continues to operate out of Brooklyn to this day.