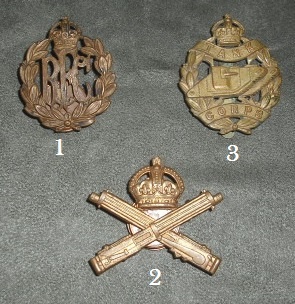 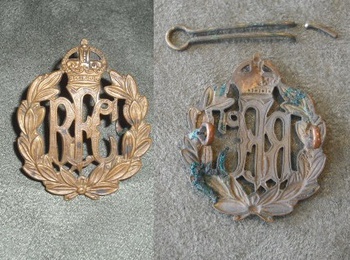 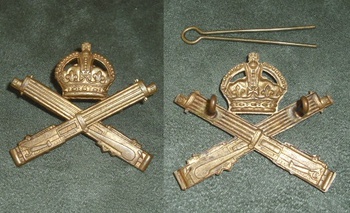 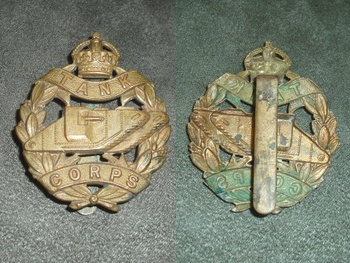 This week I thought I’d share three rather short lived and therefore scarce WWI badges representing weapons that changed the face of war:

1. The Royal Flying Corps was established in 1912, and originally used for reconnaissance. Of course eventually planes started shooting at each other, and then became weapons platforms in support of the ground war. In 1918 the RFC merged with the Royal Naval Air Service to become the Royal Air Force. My badge came out of an estate in Canada that also netted me a Royal Canadian Air Force badge – perhaps from the same vet’s career? While photographing, I noticed the green verdigris forming on back. I’ll have to do a bit of cleaning. Also, while removing the cotter pin for this photo, a piece of it broke off. Well, it is almost 100 years old.

2. The Machinegun Corps was formed in 1915 in an effort to increase the effectiveness of the way machineguns were employed and provide specialized training to their operators. As many veterans will tell you, weapons that put out a high volume of fire tend to attract a lot of unwelcome attention from the enemy. Of the 170,500 men assigned to the MGC, over 62,000 became casualties, earning the nickname “The Suicide Club”. The Corps was disbanded in 1922. I purchased this badge from a coffee can full of badges at a gun show when I first started this collection. Now that I’m a bit more seasoned, I’m a little skeptical of its originality, in part due to the lack of patina and angle of the guns. It will do till better comes along.

3. The Tank Corps was developed from the “Heavy Branch” of the Machinegun Corps in 1917. The first tanks were slow, mechanically unreliable, and the conditions inside were nearly unbearable, but they proved their worth. In 1923 the Tank Corps became the Royal Tank Corps, adopted the motto “Fear Naught”, and the badge was altered accordingly. This badge came from a trophy belt that was falling apart. I spent a long evening with a tooth brush and soapy water cleaning the crud off each badge, and now I notice some of that green verdigris has come back on the reverse side. Sigh.