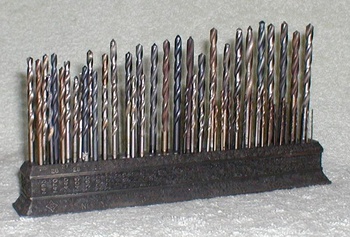 This is a drill bit holder made by The Cleveland Twist Drill Company of Cleveland, Ohio, U.S.A. - It is 8 1/4" long by 1 1/4" wide and stands 1 1/4" high (without bits) - made of solid brass with a black crinkle paint finish
Both sides are marked on the base part as The Cleveland Twist Drill Co. Cleveland, Ohio U.S.A. and New York / Chicago / San Francisco / London -- in addition, the number sizes from 1 - 24 on one side and 25 - 60 on the other, and include the equivalent decimal sizes from .0400 to .2280. - One short end is stamped with Made in U.S.A., the other short end Patents Pending. - Each hole is drilled to accommodate the proper size bit for a total of 60. - Circa estimated to be 1920's to early 1930's
** Cleveland Twist Drill was founded in Cleveland, Ohio in 1876 by Jacob D. Cox II, son of a Civil War general and former governor of Ohio. The company became a leader in the manufacture of superior-grade high-speed twist drills and pioneered the development of steels made of molybdenum as a substitute for tungsten. By 1911 the company had already expanded into the New York and Chicago areas. By 1936 it was the world's largest maker of high-speed drills and reamers. In 1968, the company merged with the National Acme Company to become Acme-Cleveland Corporation.