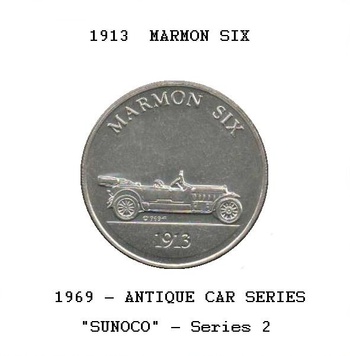 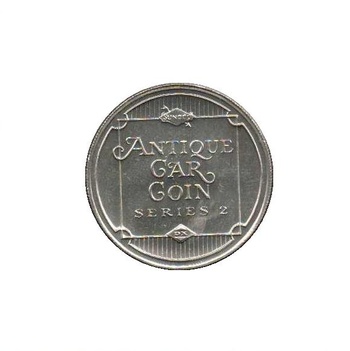 - 1969 "Antique Car Coin" aluminum token / Sunoco Company
- Minted by the Franklin Mint for the Sun Oil Co. / Series 2
- "1913 Marmon Six" /26mm in diameter / uncirculated condition
- In 1969-70, Sunoco would give out these "Antique Car" tokens upon purchases made at their gas stations. - Also provided was a cardboard game board with cut-outs so these could be pressed into the corresponding slots.
*** Marmon Motor Car Company was an American automobile manufacture founded in 1902. - The Model 32 of 1909 spawned the Wasp, which driven by Marmon engineer Ray Harroun, was the winner of the first ever Indianapolis 500 motor race in 1911. The 1913 Model 48 shown on the token was a left-hand steering touring car with a cast aluminum body, electric headlights and horn, as well as electric courtesy lights for the dash and doors. It was equipped with a T-head straight-6 engine.