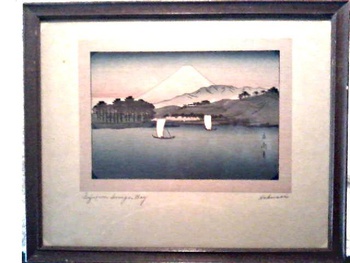 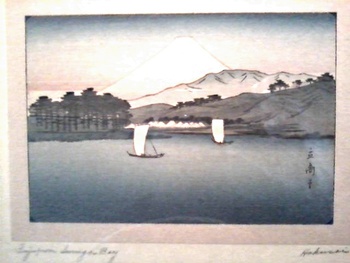 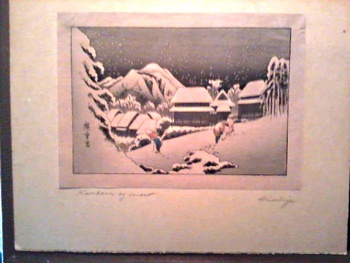 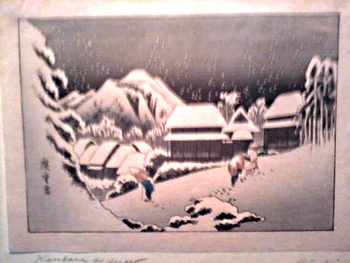 These were put aside for me by my friend in production at Salvation Army. She said "Here I know you love Asian art. Hope this is your ship coming in." I bought these for $1.88 ! Originally I though it was just the framed print. To my surprise I saw the cardboard back just fitted in place. When I removed it and turned it over, there was the second print ! The other frame must have broken and it was tucked in back for safe keeping. This exposed the brittle back paper of the framed one and it looks very old. The framed one is a Katsushika Hokusai woodblock print but I have no clue how old, original or valuable they are. These are probably just antique reproductions. His most famous work is "The Great Wave Off Kanagawa". The unframed one shows bleed through of ink and is just tacked to the cardboard with glue at the top corners. It's titled "Kambarra by Snow" written in pencil. It's signed Hiroshige. The framed one is titled " Fuji from Sumiga Bay" both are signed in pencil but I don't believe it's the artist hand. Probably who ever mounted and framed them wrote it. They are small only 5" x 7" unframed. The framed one is about 8" x 10". Now I need to find a somewhat matching frame for the other print. I'm quite pleased with these to say the least. -Mike-

Katsushika Hokusai
Courtesy of Wikipedia
Katsushika Hokusai (October 31, 1760 (exact date questionable) – May 10, 1849) was a Japanese artist, ukiyo-e painter and printmaker of the Edo period.He was influenced by such painters as Sesshu, and other styles of Chinese painting. Born in Edo (now Tokyo), Hokusai is best known as author of the woodblock print series Thirty-six Views of Mount Fuji (Fugaku Sanj roku-kei, c. 1831) which includes the internationally recognized print, The Great Wave off Kanagawa, created during the 1820s.
Hokusai created the "Thirty-Six Views" both as a response to a domestic travel boom and as part of a personal obsession with Mount Fuji. It was this series, specifically The Great Wave print and Fuji in Clear Weather, that secured Hokusai’s fame both in Japan and overseas. As historian Richard Lane concludes, "Indeed, if there is one work that made Hokusai's name, both in Japan and abroad, it must be this monumental print-series...".While Hokusai's work prior to this series is certainly important, it was not until this series that he gained broad recognition.

Ando Hiroshige
Courtesy Wikipedia
Utagawa Hiroshige (Japanese), also Ando Hiroshige (Japanese 1797 – 12 October 1858) was a Japanese ukiyo-e artist, considered the last great master of that tradition.
Hiroshige is best known for his landscapes, such as the series The Fifty-three Stations of the T Kaid and The Sixty-nine Stations of the Kiso Kaid; and for his depictions of birds and flowers. The subjects of his work were atypical of the ukiyo-e genre, whose typical focus was on beautiful women, popular actors, and other scenes of the urban pleasure districts of Japan's Edo period (1603–1868). The popular Thirty-six Views of Mount Fuji series by Hokusai was a strong influence on Hiroshige's choice of subject, though Hiroshige's approach was more poetic and ambient than Hokusai's bolder, more formal prints. In his Snow at Kambara from his Fifty-Three Stations of the T kaid Highway series, Hiroshige presents the certain quiet that comes with a fresh snowfall and perhaps a feeling of loneliness as solitary figures trudge along the pass in the cold.