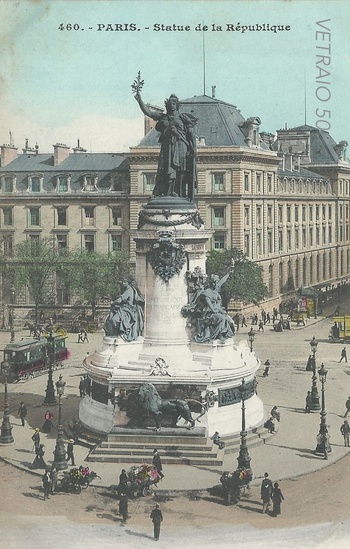 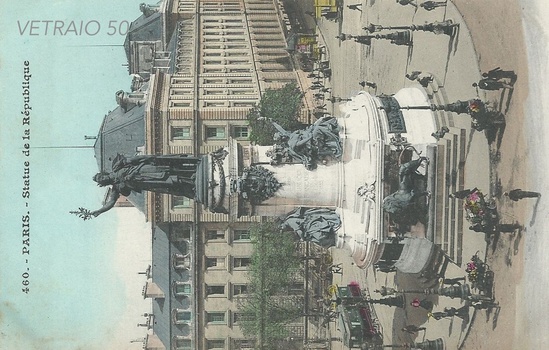 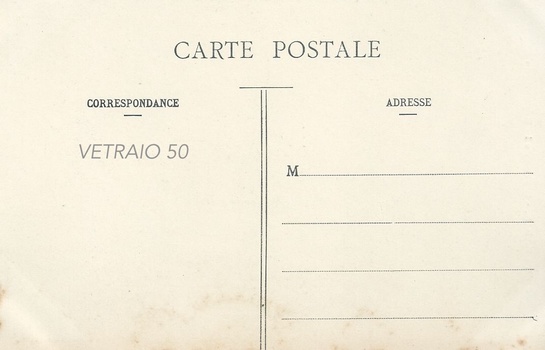 This postcard is one of the few hand coloured postcards of Paris that were left in the Septimus and Clara Miller collection I bought some time ago here in Sydney. The Millers bought two cards that show this monument that stands at a key point in the eastern side of the city of Paris: la place de la République.

The square lies at the intersection of three arrondissements: the 3rd , the 10th and the 11th. Seven streets flow from this point above ground and below five underground 'metro' train lines converge here as well. It is an important “nœud de correspondances”: a network hub.

In his re-organization of the city, Baron Haussmann created a new huge rectangular square there. In doing so he pulled down a large number of historic theatre buildings notably the Théâtre-Historique or Théâtre-Lyrique founded by Alexandre Dumas in 1847. His idea was to open up the eastern traffic network in Paris.

In 1883 a monument to the glory of the French Republic was erected in the centre of the square. It is known as Le Monument à la République, or la Statue de la République . It is actually the work of two brothers: Charles & Léopold Morice.

Léopold Morice’s statue is an allegorical figure of ‘the Republic‘ aka ‘Marianne’.

Marianne is made of bronze and is 9.5 metres high. She is depicted standing dressed in a toga with a sword hanging from her belted waist. She is wearing a Phrygian cap, a revolutionary symbol of freedom topped with a laurel leaf crown. In her right hand she holds high an olive branch, a symbol of peace and her left hand rests on a tablet bearing an inscription “Human Rights”.

The pedestal was created by Charles Morice. It is made of marble and is surrounded by three figures: La Liberté, L'Égalité & La Fraternité. Below them on a pedestal are twelve high relief bronze plaques representing twelve important moments of the French Republic and a bronze lion symbolizing ‘Universal Suffrage’.

Just recently in 2013 the square has been remodeled and a large pond now surrounds the monument where people can sit and reflect.