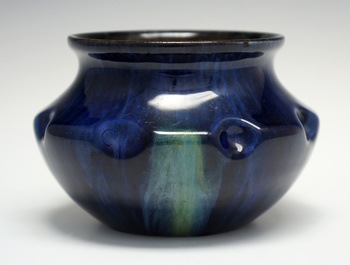 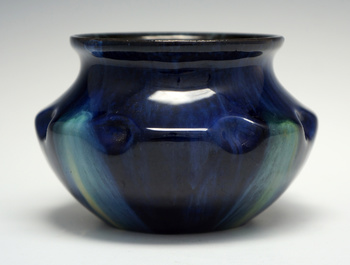 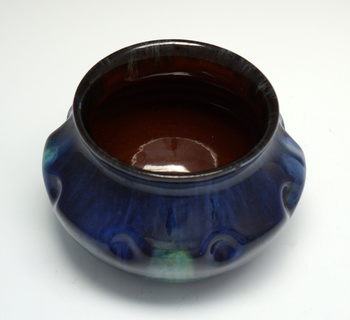 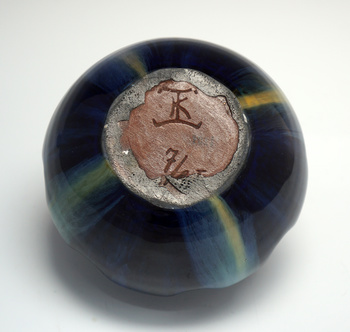 A wonderful and rare stoneware ceramic bowl with stylized dimpled edge and "cat eye" type royal blue, green, yellow and cream lustrous glaze by Theodor Keerl (1862-1939). The vase was produced by Keerl at the Bavarian Art Pottery Keerl & Schumann GmbH in the late 1910s to early 1920s and carries his distinctive artist mark and either a form and/or glaze identification number etched on the bottom. Dimensions: 3.2”(H) x 4.5”(W).

Theodor Keerl (Allgäu, 1862 - 1939) was a German master of ceramic glaze who took his secrets to the grave. His glazes have never been reproduced, though approximated at times. Keerl studied at the München Kunstmalerei, Zeichnen und wird Hofglasmaler, where he developed his glazes that are known for their lightness and luminosity. Keerl and Carl Schumann founded the "Bavarian Art Pottery Keerl & Schumann GmbH" in the mid-1910s. The pottery was located on the site of the Arzberg porcelain factory and employed twelve to 14 employees. Keerl's pottery was originally intended as a supplement to porcelain produced by Schumann. The Keerl'sche production at that time consisted vases, boxes, bowls, candlesticks, writing tools, lamp bases, smoke sets, later also a small number of figurative models, mainly birds. Both companies had common patterns stock and exhibited together international exhibitions and fairs. Keerl was awarded a gold medal for his glaze work at the 1913 World Expo in Gent. The Great Depression and world economic downturn in 1930 ultimately led to the sale of Keerl's "Bavarian Art Pottery," and he returned to Landshut in 1932, where he died in December 1939.

Keerl was the subject of a major retrospective in 2012 (3/23/2012 - 9/30/2012) at the Volkskundlichen Gerätemuseum (Ethographic Museum) in Arzberg, for which a published catalog was produced, "Large Special Exhibition: A real Keerl - Theodor Keerl, a master of glaze."