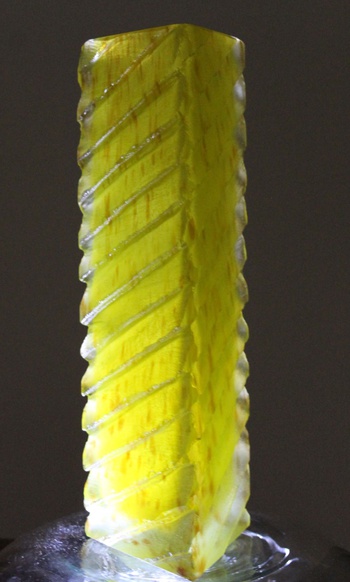 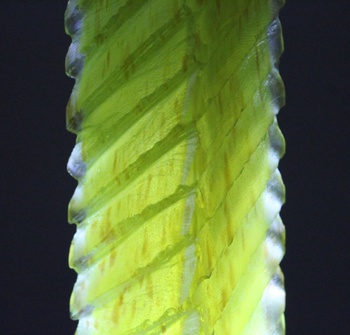 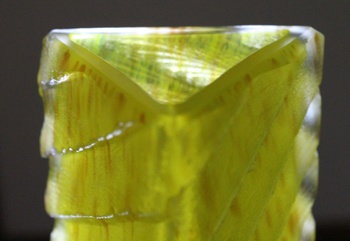 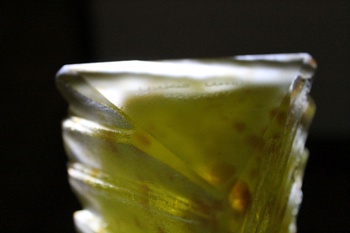 This vase to me really speaks of the contemporary glass artists in Japan.

Apart from having excellent blowing and moulding skills they appear to really relish post working the glass to give texture and optics.

This is the work of Yukio Ueno, a highly regarded artist from Tokyo.

Born in 1949 he has worked with Iwata Glass and Joetsu Crystal (known as Kurata Glass), and now has his own studio.
He has been collected and exhibited in many museums in Germany, Brazil, and Hungary, and of course Japan.

I believe it has been initially moulded and then post worked.
Yellow glass with darker spatters has been clear cased and moulded.
The glass then appears to have been chipped to give it a non uniform feel, and then the exterior has been sand blasted.

The base is signed "Yukio Ueno UR13277". I have no idea what the numbers mean!

It has such an organic feel and look.
It fascinates me and despite it's size it is restful and uplifting.

I bought this from Japan and had it shipped here, but despite that the cost was less than $100. For a wonderful handmade piece of glass I think I got a bargain!