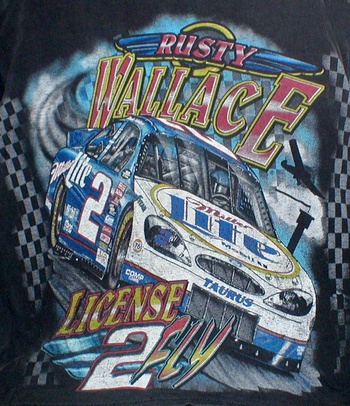 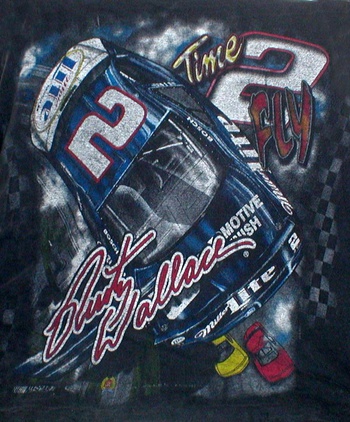 This is a mens NASCAR "Rusty Wallace" T-shirt from circa 1998-1999
Color graphics on both front and back - race car paint scheme is the Penske Racing Team Miller Lite beer #2 on the Ford Taurus used 1998-99 season.
Graphics also on sleeves / 100% cotton / Made in Mexico
** Russell William "Rusty" Wallace, Jr. is a retired NASCAR race car driver, a former NASCAR Winston Cup Champion and the Lead Studio Analyst for Auto Racing at ABC and ESPN. Considered one of racing's most well-known and charismatic personalities, he is a member of four of stock car racing's major halls of fame: the NASCAR Hall of Fame (2013), the International Motorsports Hall of Fame (2013), the Motorsports Hall of Fame of America (2014) and the National Motorsports Press Association Hall of Fame (2010).