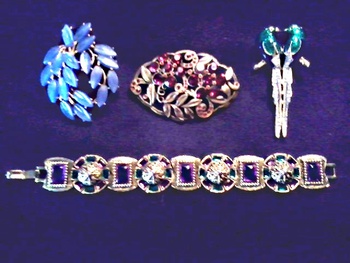 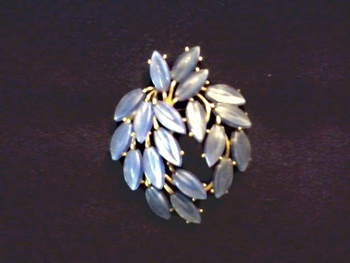 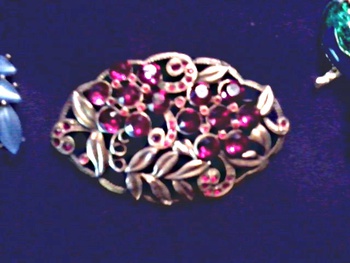 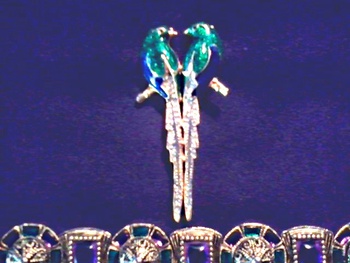 While Salvation Army yielded most of these pieces, Volunteer's of America provided me with my first Crown Trifari piece. The lavender (periwinkle) leaf brooch kept luring me back until I finally asked to see it. Yep, clearly marked on one of the bottom leaves with their 1955 and later mark. So this is probably late fifties early sixties. There are also a pair of ear rings for this piece which are comprised of just three of the leaves. I did find this actual pin with ear rings online being sold by Etsy, but no price as it had already sold. The next piece is the Emmons bracelet which is marked on the clasp. Kind of a deco look with large square amethyst type stones separated by round medallions with green and purple stones. Emmons is an upscale line created by Sarah Conventy's Charles H. Stuart in 1949 and named to honor his wife Caroline (Emmons) Stuart. Sarah being his daughter. The home party based company lasted till 1981 when they closed their doors. The large brass and garnet brooch could be older. It has a bit of wear on it. No makers mark either so this one's a mystery. The garnet like flowers are very nice. Last is the two parrot brooch. Beautiful enameled bodies with rhinestone tails and eyes. This piece has a mark but it's written in script and hard to make out. Oddly it looks like maybe Bryd or Boyd. Very pleased with today's finds ! -Mike-