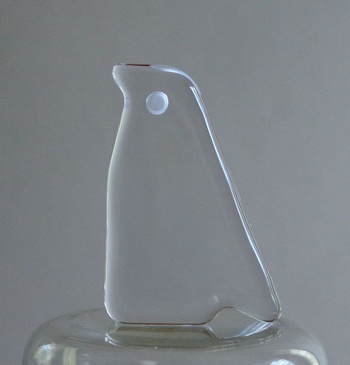 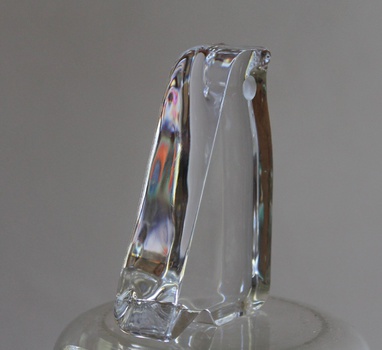 You may have seen some of these animals from Sasaki's zoo series, designed by the great designer Denji Takeuchi, who is considered one of Japan's greatest modern designers.

Takeuchi TsutoOsamu (1934-2001) worked as production designer at Sasaki from 1958-1995, often as a contractor, and was responsible for many of their successful designs.

More than that however, he developed his art glass along very architectural, structured but complex paths and has influenced many modern worldwide glass artists.
He traveled widely, and demonstrated, spoke and worked in New York, Czechoslovakia, UK and Taiwan and arranged many training arrangements for worldwide glass artists to work in Japan.
His work is held in many worldwide museums and galleries.

This penguin for all it's apparent simplicity is a very sophisticated design.
Made from crystal it's shape has been pulled back a very long way yet is still clearly a penguin. The front has a polished rounded edge and the back is polished quite flat, but for the cut and polished eye.
He sits proudly, supreme, but asking to be held.