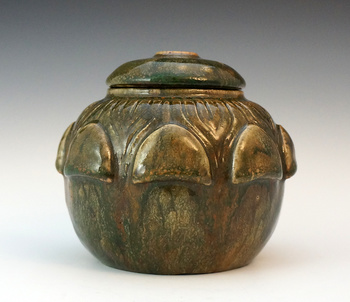 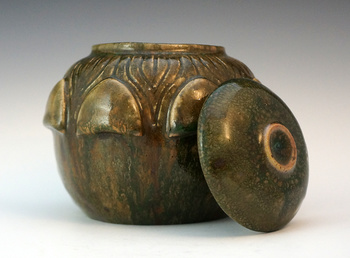 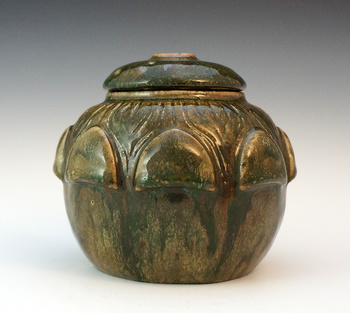 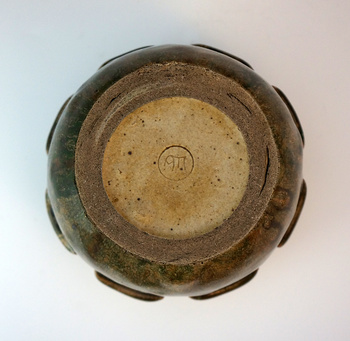 Large sized covered stoneware jar hand thrown and designed by André Methey, circa 1900. The etched design and applied cap motif, I believe was meant to represent mushrooms, as the caps applied to the side of the covered jar allow the glaze to trail in a way to give the illusion of a repetitive mushroom motif. Finding a covered Methey piece of this size with the lid intact and accompanying is rare, as one can imagine many were lost or damaged. The underside of the jar base has Methey's "AM" artist cypher. Methey pieces from this early period represent examples of the beginning of modern studio pottery - he had his hand in every aspect of this jar's production, from the form construction, glaze chemistry and firing. Dimensions: 5”(height) x 5.75”(width).
-------------------------
André Methey (1871-1920). Born in Laignes (Cote d'Or) in 1871, Methey was apprenticed at age 14 to a stonemason and later studied with a plaster modeler. At the age of 15, he moved with his family to Paris and soon, after the death of his father, was forced to support his mother and siblings. He entered military service, and while stationed in Auxerre (located between Paris and Dijon), he studied drawing and became interested in ceramics after reading Edouard Garnier's Traite de Ceramique. Methey's earliest creations followed the tradition of Japanese and Korean wares, and he began to use flambé glazes in 1900. He first exhibited his work in 1901. Two years later, he settled in a small house at Asnieres (a suburb of Paris), where he built a kiln and prepared his own clay and glazes. Abandoning Japonism and Art Nouveau, Methey later turned to Persian-inspired wares and tin-glazed earthenware decorated with designs by Fauve painters including Redon, Rouault, Matisse, Bonnard, Vlaminck, and Derain.