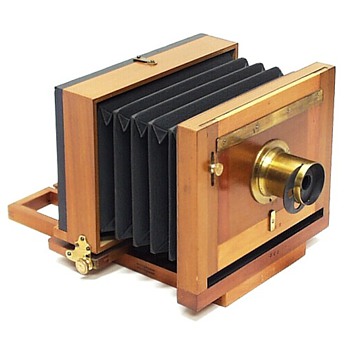 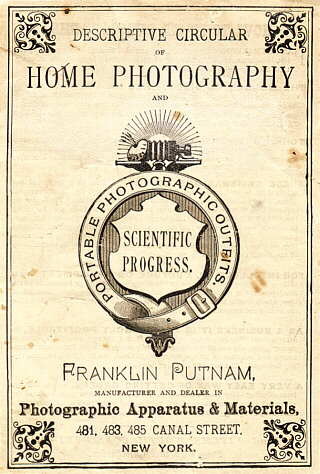 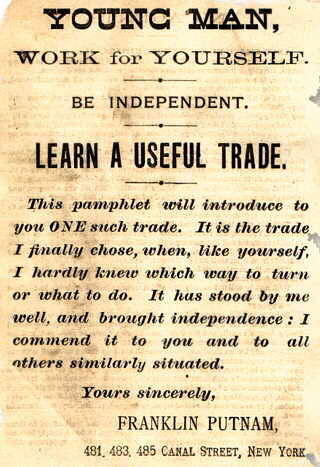 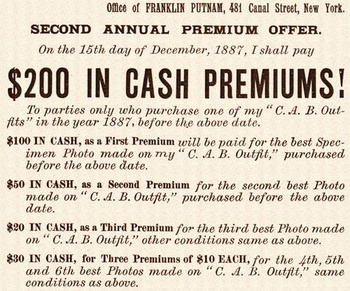 Mid-to-late 1800s wood cameras are now entering their third century in appearance. Many of these cameras, specifically those made by manufacturers such as the American Optical Company, Scovill Manufacturing Company, and E. & H.T. Anthony, are well documented and represented by vast quantities of catalogues, advertisements and other references. However, a few wood cameras have no background. They appear in collections without any advertisements or references - mysterious in their origins. Putnam’s Marvel was a camera that exhibited this beguiling phenomenon. Marvel cameras regularly appeared in camera shows and online auctions indicating that the cameras must have been widely promoted.

For years the Marvel field camera by F. Putnam baffled collectors. They are nicely made of inexpensive wood (usually mismatched pieces of lumber), brass hardware, and a Scovill lens. That was it; a generic design. No patent dates or other information adorned the cameras. Back in 2000 a friend and collector and I were talking about Putnam and his “Marvel” line of cameras one evening. We mused about finding these cameras curious, not because of the cameras themselves, but because of the mysterious “F. Putnam” moniker and the engaging name of “Marvel” stamped into the cameras. Actually, we think the exact words were, “Who the hell was Putnam?”

That all changed when I won a rare Putnam trade circular on eBay. Finally, we learned the truth about Putnam and his cameras. To our knowledge, no photograph of Franklin Putnam exists. We do not know the dates of his birth or death but two documents state that he was raised in a "pretty rough farm district" and "I worked eight whole months on a farm for only $100." But he certainly had a flair for marketing and his strategies were unlike any we’d seen from the 19th century. Aside from advertising himself as a “manufacturer and dealer” whose business was built on selling a variety of products (cameras, accessories, and sundries) under the Putnam name - including the Marvel family of tailboard cameras, Putnam would fit in today with the slickest of infomercials.

He wasn’t just peddling photographic equipment. He was selling his customers a career; a better, more cultured life and an easy way to wealth and prosperity. Just buy one of his miraculous photographic outfits and in just one week you too can be a professional photographer! Franklin Putnam seemed to rely on advertisements placed in newspapers, magazines and journals like The Photographic Times, direct mailings as well as his Canal Street store front location as promotional and sales outlets. Further into our research, more information about Putnam was found in the Warshaw Collection at the Smithsonian Institution. (Refers to the fourth image.)

Most often found in a 5x8 inch format, the Marvel is a rear focusing tailboard camera bearing a strong resemblance to versions made by the American Optical Company and the Scovill Manufacturing Company. The most popular opinion held by collectors at the time was that Marvel cameras were privately labeled Waterbury View cameras made by the Scovill Manufacturing Company in the 1880s.

We later found that Marvel cameras were indeed made by Scovill but they were not specifically the Waterbury model; actually a model called the Favorite. This was evidenced with some cameras having a F. Putnam overstrike in the wood on top of the usual Scovill Mfg. Company information. Additionally, a careful comparison of advertising cuts showed that Franklin Putnam actually used American Optical / Scovill artwork to market his cameras. Capping off the research, we finally found a definitive statement by Putnam about the origin of his cameras:

“These Cameras Are Not Toys. They have been used and approved by eminent photographers, and are recommended by the Photographic Times, the standard photographic journal of the United States. The Lenses are imported from Europe, and the Cameras and other apparatus are made for me by the AMERICAN OPTICAL CO., the largest manufacturers of photographic apparatus in the world; they have four factories and make more than one-half of all the Cameras used by photographers in this country, and export largely to other countries, which is a positive guarantee of the excellence and accuracy in workmanship of the Marvel Camera in every respect.”