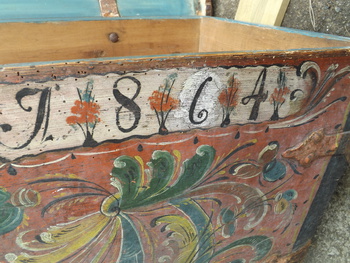 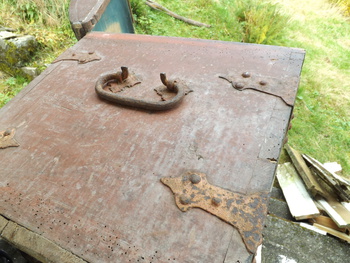 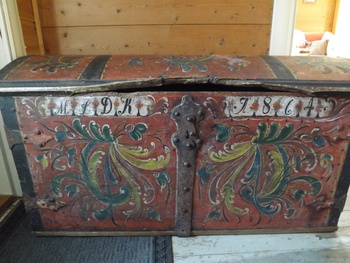 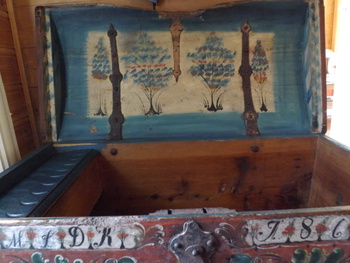 This rosemaling chest was found at the beginning of August this year in the Hardangerfjord area in west Norway near our house, at a village community rummage store. We had a very traumatic year leading up to this year's trip and had very little money. Towards the end of September we were due to leave for home in the UK and called at the store (only open on Saturdays ) and the chest was still there with a reduced price tag. I offered one of the volunteer ladies an even smaller figure and after her attempts to sell me a nearly new Ikea Ottoman for even less, she reluctantly accepted my offer. My wife almost fainted at the audacity but helped the volunteer lady to lug it to our car as I am still recovering from a smashed femur and pelvis. We applied a liberal but careful coat of timber preservative and you can see how bright the colour now appears. The rosemaling decoration appears newer than the chest as in some places the wood had been damaged previously and subsequently worn smooth before being over-painted. The intriguing question for me concerns the apparent re-cycling of the chest as one of the (marriage?) partners names has been over-painted in white and then new initials added along with the the decade being altered, all in a different handwriting to the original inscription. Has anyone come across this before? Incidentally, we have left the chest in our Norwegian house, feeling that it will be more at home there and well away from any heating whilst we are in the UK.