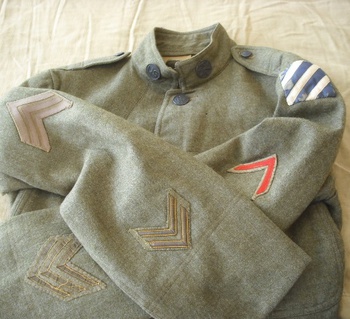 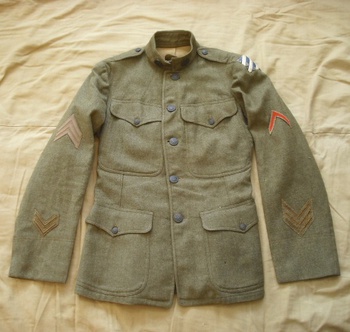 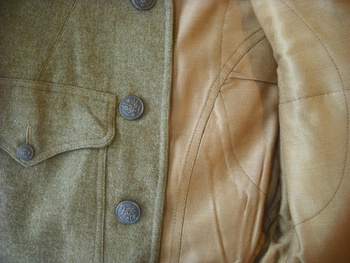 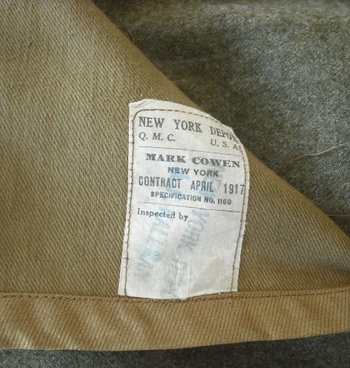 The Model 1917 Jacket was standard issue for the US Army in WWI. The earlier Model 1910 Jacket, which saw limited use during the war, was tan rather than olive drab. The later US Model 1918 jacket and British manufactured US jackets had interior pockets with outside flaps instead of the patch pockets seen here. The jacket is fully lined (also not seen on British manufactured jackets) and inside the lining at the bottom near the button fly is a quartermaster inspection tag ink stamped "NEW YORK DEPOT" and "A.F.KALLMAN".

Patches were made out of a variety of materials during and immediately after the war as shown on this uniform. The better quality of materials in some of these patches makes me think that some may have been applied while the soldier was on occupation duty in Germany immediately post-war.

Sergeant’s rank is worn on his right sleeve. It has a gabardine background with three felt chevrons sewn to the background.

Two wound stripes are worn near the right cuff, indicating the soldier was wounded in action on two different occasions. They are woven with gold/bronze metallic thread on a felt backing.

Three overseas service stripes are worn near his left cuff, each indicating six months service in the theater of operations, or 18 months total. Almost certainly part of that time would have been during the occupation after the armistice. The stripes are made with metallic ribbon folded at the bend of the stripes sewn to felt.

The red chevron on the left sleeve is a discharge stripe. After their return to the States, discharged soldiers were allowed to continue wearing their uniforms for a while until they could purchase civilian clothes. The stripe indicated the person was discharged and no longer under military jurisdiction. This stripe is felt sewn to felt and rather crudely stitched to the uniform, probably by the soldier himself.

The unit patch is that of the Third Division. The three white stripes (signifying the division’s actions at the Marne, Saint Mihiel, and Meuse-Argonne) are made from embroidered ribbon, sewn to what appears to be a velvet backing. The Third Division arrived in France in April 1918 and remained in Europe after the armistice for the occupation of Germany – “The Watch on the Rhine”.

The jacket was manufactured with holes for attaching collar disks, and since no disks came with the jacket, I’ve added the correct era standard US disk and a disk for L Company, 30th Infantry Regiment, which was a regiment under the Third Division.

The buttons are the standard model 1902 buttons for all ranks in blackened brass, featuring the US eagle with “glory” of stars overhead.

This jacket was given to me by the grandson of the original owner, because he said he would rather see it in my collection than being eaten by moths in his attic. Although that was in the 1980s, I was still amazed he didn’t ask money for it.