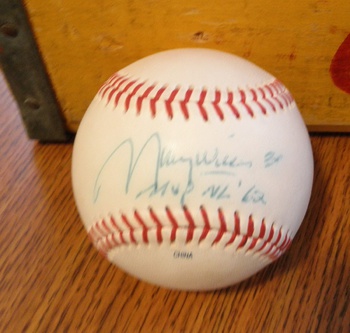 Well DizzyDave, I can finally say I hit the picking jackpot as far as signed baseballs go, like you have. This is an autographed Maury Wills baseball with "MVP NL '62" under it. I bought it for $9. My father grew up in southern California in the late fifties to mid sixties, arguably the best years of the Dodgers organization. He was their biggest fan. I was raised on stories about Koufax, Drysdale, the Davises and Wills. I found it while browsing the antique mall up by my father's house. I showed it to him and he hesitated buying it, as he always does with sports memorabilia he later treasures. I said if you don't buy it, I am going to buy it for you. He balked, so I bought it. He told me to keep it. Rather than argue with him, I didn't respond, but when I go home tomorrow, the ball will be sitting on his book shelf, and I know he will appreciate it.