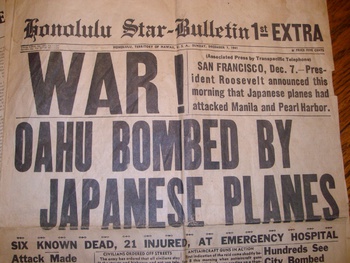 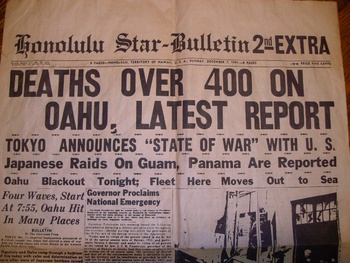 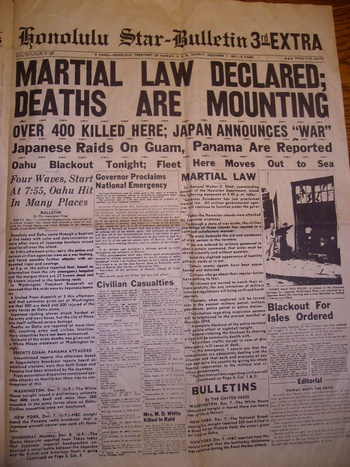 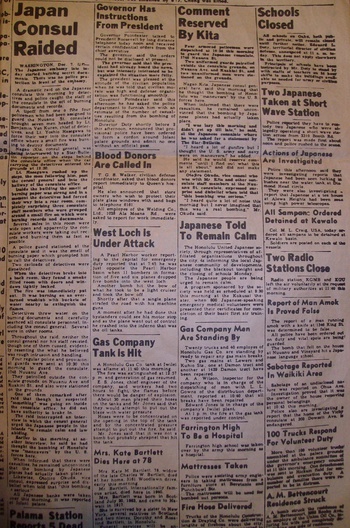 Well, this was the straw that broke the camels back. America was at war. Major forces had been trying to keep the U.S. out of any conflict but after December 7th that would not be the case anymore. I'm sure every major and minor paper in the world had something like this for the headlines on the 8th. In fact in Honolulu the Sunday paper was being read as the 1st wave were dropping their bombs. What you see in this paper is the extra running of a special "EXTRA" printed later that day. They would actually have 3 "extras" for December 7th because the causality figures were constantly being adjusted upward and dozens of new facts and pictures also flooding in. In fact, in this 1st extra edition there were only 6 known dead and 21 injured. Wow what a day. What a piece of history and to have it from the "Honolulu Star Bulletin" who was there at the time it happened. I have all three of the extras that were put out that day plus a followup paper that gave the "bottom line" figures on the death & destruction in their totality. All are in pretty good shape. My uncle was there in Hawaii and saved these and then much later, gave them to me. I'm glad he did.