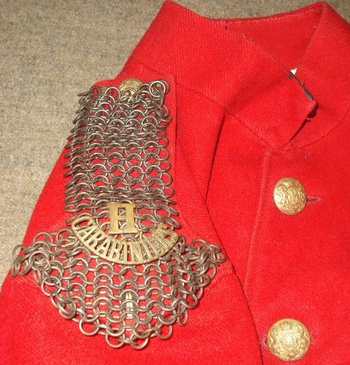 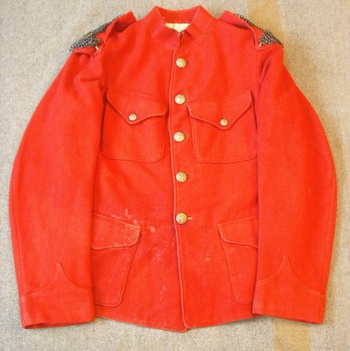 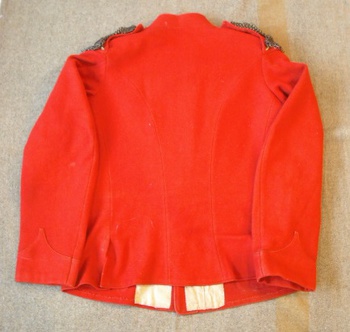 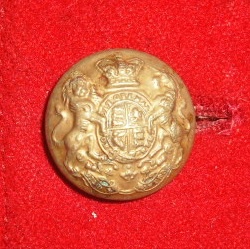 This pattern of jacket was likely issued at the end of the 19th century - in the twilight of British horsemen in scarlet service dress.

Here we also see the last vestiges of chainmail, worn on the shoulders of cavalrymen to blunt the impact of the downward stroke of an enemy saber. By the Boer War of 1899, one writer quipped that they were more useful for cleaning pots and pans in camp. These were worn by certain regiments of heavy cavalry, and were carried over to the dress uniforms of regiments of the Royal Armored Corps. The chains shown did not come with the uniform, but the jacket had the attachment hooks and reinforcement for them, and so they are here as an example of how the uniform would have looked with it's chains attached.

The jacket has standard British general service buttons which bear the crown of Queen Victoria, and are back marked “PLAYER BROS. BIRMINGHAM” Player brothers was a company that manufactured buttons in the 1860s till the early 1900s.

Although khaki replaced scarlet in the field during the Boer War of 1999-1902, horse cavalry continued to play a major role in South Africa. The 1902 service dress would spell the end of scarlet in other than formal occasions, but the notion of mounted cavalry charging into battle would persist until WWI.

Addendum: I've been discussing some questions I had about this uniform at another web site (The British & Commonwealth Badge Collector's Forum) and now feel I should point out two irregularities:

1 - "H" and "Carabiniers” shoulder titles came to me mounted on the chains. The two British units that had the word "carabineer" in their title wore blue, not scarlet, jackets. Also, the combination of a separate "H" with the Carbineers title is something the experts hadn't seen before.

2 - It's unusual that a cavalry unit had general service buttons rather than regimental buttons, so these may have been added at some later time.