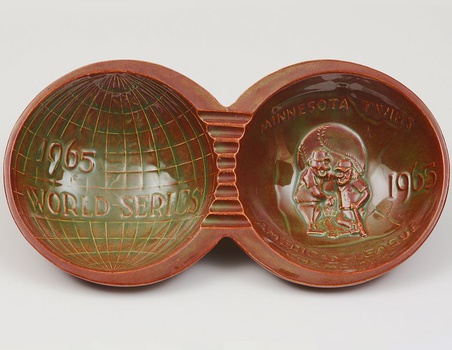 Is everyone ready for the 110th Anniversary of the World Series to kick off Tuesday (Oct. 21)? I am! Although our beleaguered MN Twins yet again failed to reach the playoffs, the series between Kansas City Royals and San Francisco Giants will be memorable especially since both are wildcard teams.

Win or lose, there’s something about baseball that keeps bringing many of us back. If you’re looking for die-hard action, it’s not here. Baseball is a poetic game of subtle tactics, statistics, colorful players, wild stories, and memorabilia. The season is long and pressure picks up immediately after the All Star break. Yet even if their teams are loosing, hardcore fans can’t wait for legendary opposing players to pass through town. Last year I finally saw an ace knuckleball hurler in action ... a devastating pitch when done right. (How do they do that?!)

As a collector of early pre-1900 American wood and brass cameras, baseball memorabilia, intentional or not, slowly creeps in to compete for precious display space; mostly its ‘smalls’ such as Goodwin or T206 baseball cards.

A couple years back while antiquing, we found this near mint Red Wing Pottery double ashtray commemorating the MN Twins' 1965 World Series appearance. The left tray has the ’65 World Series emblem accompanied on the right by a MN Twins logo proudly proclaiming them as the American League champions.

Alas back in ‘65 our boys of summer lost a 7th game heartbreaker (at home of all places) to Sandy Koufax and the LA Dodgers. Anyhow, here I am in 2014 ready to watch a great series. But wait ‘til next year!