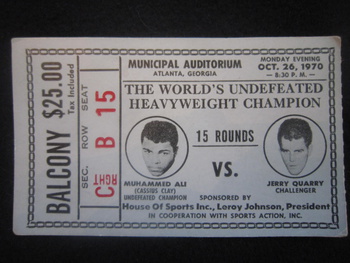 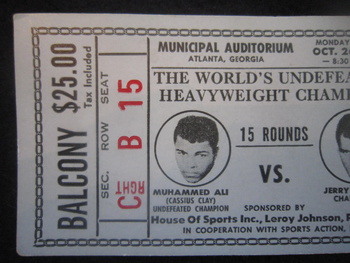 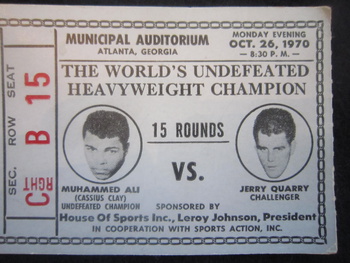 Here is another find of mine that it seems some of you may enjoy. So I thought I would share. Thanks for looking! :)

This is a cool ticket with a picture of each boxer involved in the event on the ticket. It took place at the Municipal Auditorium in Atlanta, GA, on Monday evening, October 26th, 1970, at 8:30 pm. It is almost 44 years to the day for this sporting event with it being October 22nd, 2014, right now.

It is also funny with the ticket being printed out and spelling Muhammad Ali's name wrong. It is spelled on the ticket as Muhammed Ali. With an E instead of A at the end of his name. Ali won in three rounds to mark his return to the ring after a ban of three and a half years for refusing conscription into the US army.

Apparently he is critically ill right now and living his last days. There was a premier last week in Hollywood about his life called "I am Ali". He was not able to attend this event it seems due to his health.

As always wishing all of you nothing but the best. Have an awesome remainder of the day! :)