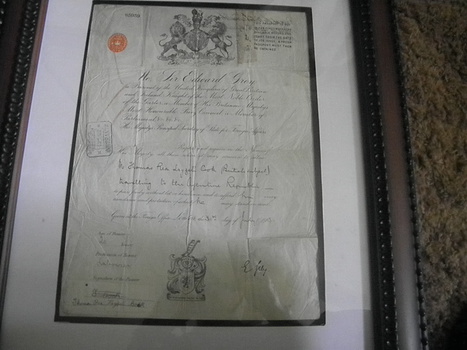 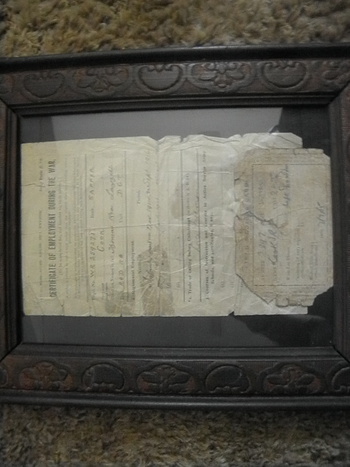 First photo is a Passport of my first wife Grandfather Thomas Rea Cook.
On 31 July 1913 He used it to follow the love of his life Elizabeth Haren
To Argentina Her father David Henry Haren Was a Station Manager
on the railway. Thomas found work on railway And become engaged
to Elizabeth but her father did not think him good enough so the
engagement was broken. off The first World War started and both
men returned to Britain to Enlist David had been in Boar War.
Thomas fought at the At the Battle of the Somme and was wounded.
He was sent to the Medical aid tent and there met David they then spent the rest of that terrible War time together and become good friends
Elizabeth become engaged three times after Thomas but broke each off
Elizabeth was sixteen when Thomas first asked to marry him.
But after the war they did marry with the blessing of David.
And both lived to the 1970s
The Passport is quite interesting and i will write some of the wording.
It has the number 85959 top left a orange sixpence seal under it
Then We Sir Edward Grey . A Baronet of the United Kingdom of Great
Britain and Ireland Knight of the most Noble Order of the Garter A
Member of his Britannic Majesty's most Honourable Privy Council
A Member of Parliament His Majesty's Principal Secretary of State
for Foreign Affairs . Request and require in nane of his Majesty
All those whom concern allow [then name and destination]
age 20 and profession of bearer Labourer .Signed by Thomas He signed it T Cook had to re sign Full name Then signed by Sir E Grey
Passport 16 inch by 12 inch on rear of passport a postage stamp
Can not remember between 3 pence and six pence i did not want to
remove frame to find out.Second photo Army form Z18
Certificate of Employment during the War
Reg no W.R 259278 Rank Sapper Surname Cook Christian names in full
Tomas Rea Lazzell. then Regimental employment
Infantryman from Nov 1914 to Sep 1916
Loco Fire man Oct 1916 March 1918. Because of wound become fireman on Army trains. [Passport were quite a new thing then.]
P.s you will not get such important people actually signing themselves
today. another p p.s There is a Field Wound Card also at bottom.
It has card number 3847 Rank Sapper Name Cook. T.R.L Unit ,.D.G T
Wound Left Shoulder