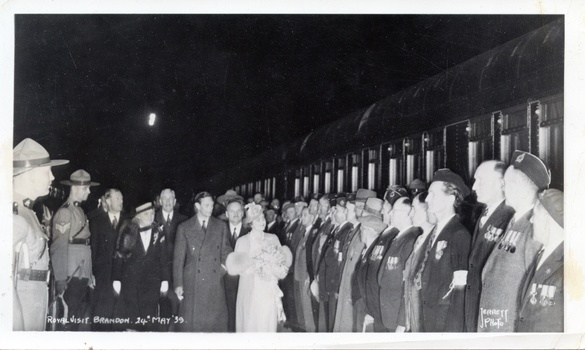 This photo is from my Grandfather's collection (he immigrated to Canada from England in 1905).

"The 1939 royal tour of Canada was a cross-Canada royal tour by King George VI and Queen Elizabeth The Queen Mother, lasting from May 17 to June 15, 1939, including a visit to the United States on June 7–10. It was the first visit of a reigning monarch to Canada, and also the first time a British monarch had set foot in the United States. The royal couple visited every Canadian province as well as the Dominion of Newfoundland. The tour was an enormous event, attracting huge crowds at each new city."

"Then Prime Minister of Canada William Lyon Mackenzie King described the arrival of the royal train at Brandon as: "Wonderful cheering. A long bridge overhead crowded with people. The hour: 11 at night... the finest scene on the entire trip." The Queen herself said the reception was "the biggest thrill of the tour." "