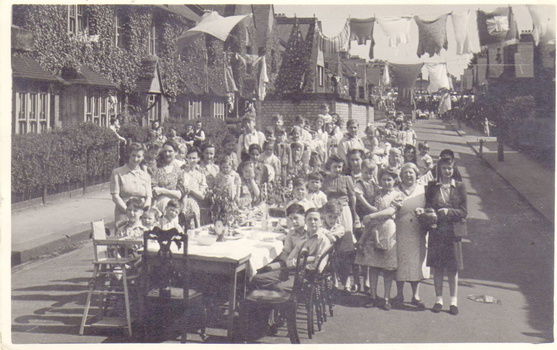 Victory in Europe Street Party 1945 Derrington Road Tooting
London Every Street Organised it own party more than one party
if Street long, Our street had four. You can see brick Air raid shelter.
Built for anyone who was passing by during a air raid. Another
shelter and party can be seen farther down street People in
houses had a Morrison shelter in house a steel frame with Steel mesh
front about six long hold two comfortably four at a squeeze .
High as a table and used as one In back garden a Anderson shelter
Dug into ground about six feet Then corrugated iron frame inserted
And covered with earth ,Sleeping four to six safe except for direct hit .
You can see few men as they were still in forces .I am four back
from right Six years old. Brother Ken 13 second right in front of me
My Mother left side of table first left.
A day we all had waited for for six years .