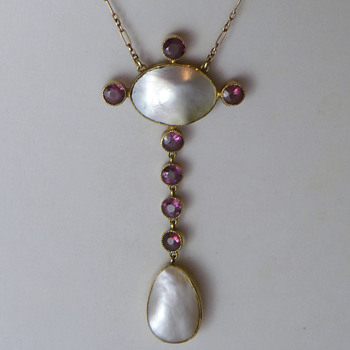 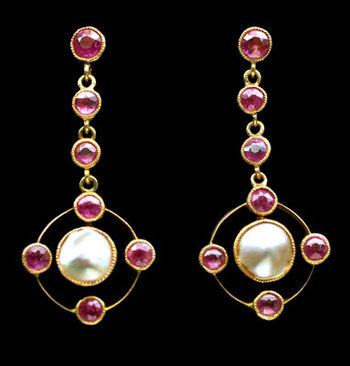 Murrle Bennett and Company was a wholesale jeweler established in London in 1884 by the partnership of Ernst Mürrle of Pforzheim, Germany and John Bennett of London, England.

The firm achieved significant successes after 1900, producing pieces in the German Art Nouveau style known as Jugendstil. They supplied Liberty & Co., the London Arts and Crafts emporium, and collaborated with famed art jewelers of the day, including Theodor Fahrner.

There is evidence MB&Co were outworkers to Liberty & Co., supplying Liberty designs to keep up with demands that Liberty couldn't satisfy from their own production firm of William Hair Haseler (WHH) in Birmingham.

Murrle Bennett and Co. was short-lived, and the partnership between the German Mürrle and British Bennett did not survive the trauma of WWI.

This necklace is a fab piece when worn, the pendant is an eye-catching 70mm high and has lovely mobility.

It's a great example of Murrle Bennett's one-off Arts & Crafts pieces, and shows the transition around 1900 to use of non-traditional settings with semi-precious stones and commonplace items such as oyster shell.

The two large sections of blister pearl contrast beautifully with the sparkling red gems, I've never had these tested, however presume they're almandine garnets.

Still they could be rubies, see the very similar MB&Co. ruby earrings from the archive on TademaGallery.com, one of the world's greatest resources for Arts & Crafts, Nouveau and Deco jewelry.