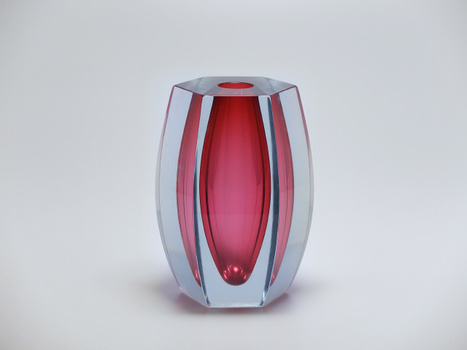 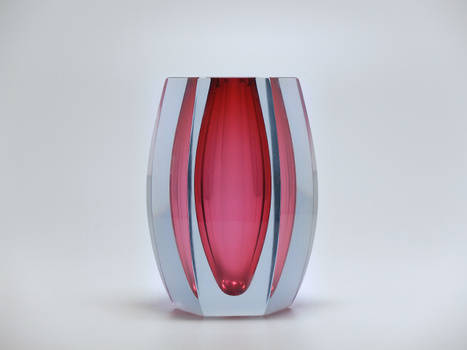 This red underlay color is very rare for Strömbergshyttan. I have seen the color in an ashtray formed as a heart (model number H32), probably a design by Gunnar Nylund ca 1953. This vase I have not the B-number for, it doesn't appear in any of my catalogs, but I still miss several of them.

The hexagonal top can also be found on Asta Strömbergs "diamond vases" from late 1950s, likewise the small opening and lesser air bowl. Gerda Strömberg also designed hexagonal vases, but I do not know anyone with a small opening. Of course there can be such models that I do not have pictures of in the directories. However I guess this vase is not a design by Gerda Strömberg. In my eyes it looks more like a design from 1950s, and more as a design by Asta Strömberg than Gerda Strömberg or Gunnar Nylund. That's my theory now. The shape can (if you like) be seen as a precursor to the elongated diamond vase model, which was the first in the series at the end of the 1950s.