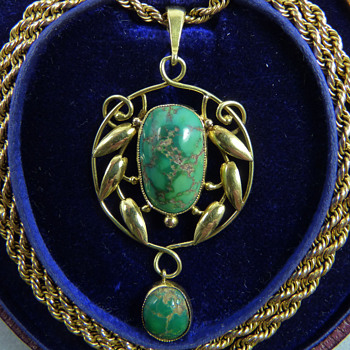 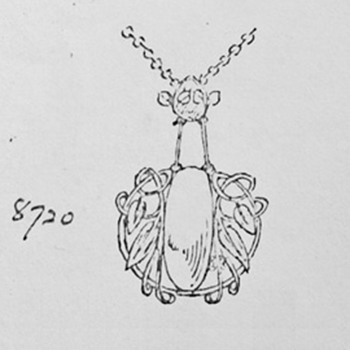 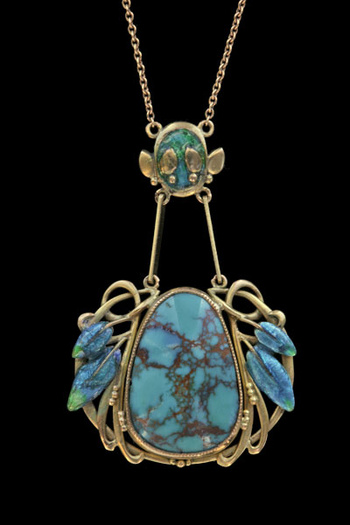 This pendant is has two little tags on the back, one says: 15ct, and the other: WHH

WHH stands for William Hair Haseler, who was in partnership with Liberty, and manufactured all their in-house silver, pewter, and jewellery.

I initially thought this was in the style of Arthur & Georgina Gaskin, however Jewels1900's comments below cast doubt the Gaskins ever designed for Liberty.

Recently I've been researching Liberty & Co wire-worked jewellery pieces, and was struck by the similarity between this WHH pendant and a more sophisticated wire-work necklace at Tadema Gallery, which included the reference page (292) and design number (8720) from the Liberty design sketch-books.

In his essay, "The Jewellery Designs of Archibald Knox" Stephen A. Martin explains that in his early pieces (to 1900) "plant and floral motifs figured into Knox’s design vocabulary, in particular his signature 'stylized honesty' leaf form".

Martin also explains just how prolific Knox was, with "over 700 jewellery designs for Liberty’s that Knox created between 1900 and 1904" ... "Archibald Knox, appears to have created nearly two-thirds of those designs marketed by this company" ... "the speed at which the various types of design must have issued from his pencil does not allow any reliable chronological ascription. It feels almost as though there was a constant stream of designs with overlapping style emerging one after the other".

I'm now certain that this WHH 15ct pendant is an early Knox designed wire-work piece, a variation on the theme illustrated in design 8720 shown above.

It's very likely that this variation is also recorded in the Liberty jewellery sketch-books in the Westminster City Archives. I hope to get up to London one day to check it out!