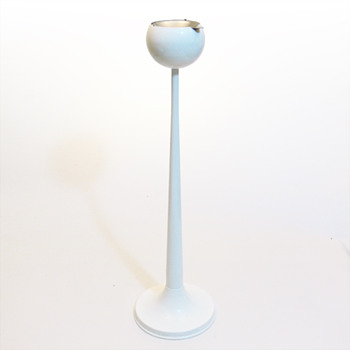 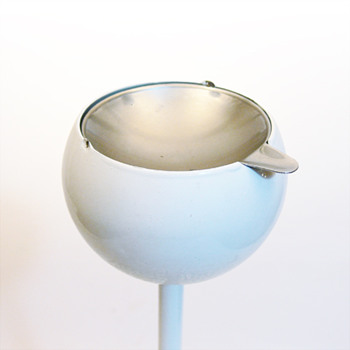 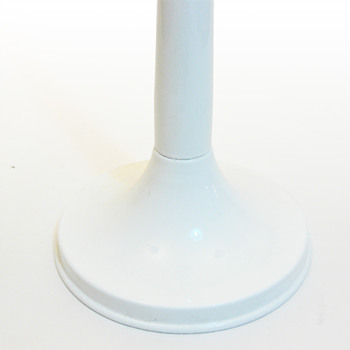 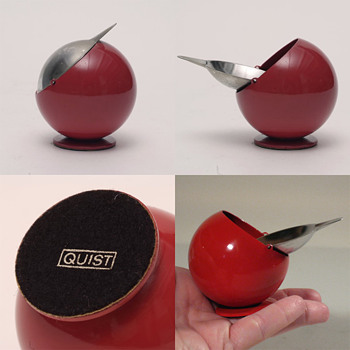 I love this ashtray!!! In fact there is something about standing-ashtrays that drives me crazy about them. Probably the fact that they work on themselves as independent pieces of furniture and not just like something resting on a center or side table...

This one is especially stylized and there's no doubt its designer searched for inspiration in the Saarinen's Tulip range of chairs and tables, which foot it imitates. The stem get narrower and narrower until it joins the ashtray, which has the shape of 3/4 of an sphere. The swinging lid with the cigarette holder allows the ash and butts to be kept out of sight.

There's only BUT to this ashtray iand it s that you have to take the whole thing to the dustbin whenever you want to empty it... only we don't smoke at home, so we really don't have to do it ;)

it's completely made of metal and stands about 50 cm. tall.
I don't know why, but I've got the feeling it was made in France...

Mistery solved in... was it less than one hour? It was GTMOOM who recognized this shape with that of the Quist ball ashtrays.

I'm borrowing the text appearing at www.design20.eu about the small red ashtray

The hardwarefactory F.W.Quist, Esslingen, Germany was founded 1868 as „Lackier- und Metallwaarenfabrik“ from the turner and metal-turner Jacob Schweizer, jun.. In the year 1872, the conversion of the business from a public company occurred, the “Actien-Plaqué Fabrik”. From 1890, the director and shareholders Friedrich Wilhelm Quist took over the business as alone-owner. In his succession four generations continued the business as family-businesses until 1981.

So, the form of the 1970 as newness presented ball-ashtray was borrowed this famous „ball“ or „globe“ (presented for the first time, 1966 at the international furniture-fair in Cologne) and „bubble“ (1968) chairs by the Finnish designer Eero Aarnio. The completely new and unconventional shape, Aarnio developed on basis of the simplest geometrical form, the ball. It advanced to a cult-object of the following decade and didn't lose any modernity until today.