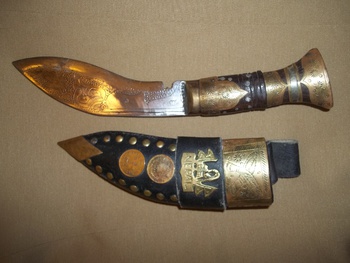 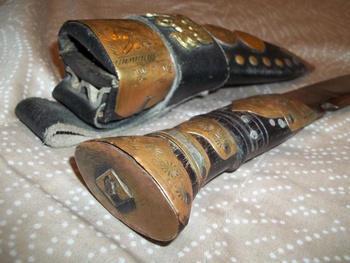 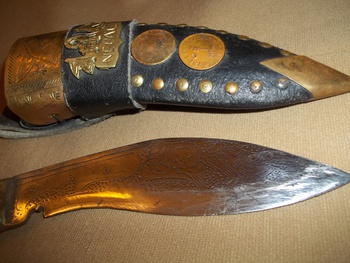 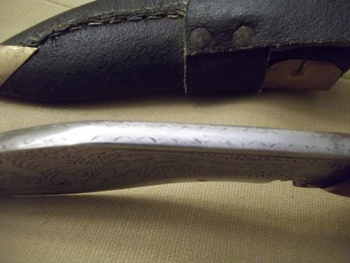 Can anyone date this knife? Here is what I know from researching it:

Antique dagger with rosewood handle, brass ornaments and hammer chiseled dragon/flower designs on the entire length of the blade.
From Eastern Nepal this dagger is called a sirupate khukiri. The name of the dagger is derived from a type of grass that grows in the hilly regions of the area named Siru. The shape of this khukuri's blade is very much like the leaf of the siru, hence the name sirupate khukuri. The unique shape made it possible to deal death blows with an upward strike. This type of dagger is also referred to as a Gurkha knife because it was used by Gurkha soldiers during the Gurkha war. The blood runnel notch on the blade near the handle was used by the warrior to cut his own thumb and flick blood in the opponents face. The 2 small areas in the leather sheath behind where the knife sits were for 2 small daggers, which are gone. You can see what I am referencing in the second photo. The ornate decorations were used on the knives of royalty and ceremonial knives. The sheathe is genuine leather (not cow) This particular dagger is believed to be from the Gurkha war 1814-1816 or older, and is a rare, hard to find item because it was used by a warrior of very high office and is incredibly well preserved. Here is some history on the knife from the worldwide web:
GURKHA KNIFE ( Symbol Of Gurkhas )
Gurkha used to carry this knife so it is also called Gurkha knife "khukuri" Gorkha army is the derived form of Gorkhali. Gurkha name comes from the "Gorkha" place in Nepal. King Prithvi Narayan Shah was the king of Gorkha. At that time Nepal was divided into many small regions where there used to be an individual king in each region. Later King Prithvi Narayan Shah realized that all the small states or regions should be united and should make a whole country. So King Prithvi Narayan Shaha with the help of his "Gorkhali" army (from Gorkha), succeeded in uniting Nepal into one kingdom around 1768-69 AD. During the early 19th century, the Gorkhali army was involved in a long-drawn battle with mercantile British India. Eventually, a peace treaty was signed, and the British, seeing how bravely the Gorkhalis fought, also made a provision in the treaty to recruit Nepalese in the British Army as British "Gurkha" soldiers.Since then, many Nepalese, mostly the Rais, Limbus, Gurungs and Magars, have served and still serve in the British Army. Their courage, sincerity and loyalty have won them praise and friendship from their British counterparts and fear and respect from their enemies. For their velour, many Gurkha soldiers have been decorated with medals of Honor, including the Victoria Cross, the highest military honor for bravery in the British Army.Prithvi Narayan Shah's descendant is King Gyanendra Bir Bikram Shah Dev, who reigns in the kingdom of Nepal Today.
The Gurkha and the Khukuri (Gurkha Knife )
The Gurkha knife "khukuri" and Gurkha soldier has a very close relationship with each other. The Gurkhas Victoria Cross medal would not be in the arms of Gurkha soldier if there was no “Gurkha knife” the khukuri. The famous “Gurkha soldier” had no reputation if there was not this “Gurkha knife” the Khukuri. So in a way we can say that without this “Gurkha knife” the Khukuri, the bravery, honesty and fearless Gurkha soldiers have resulted nothing. And because of the soldiers today this “Gurkha knife” the khukuri is our National weapon is worthy of notice